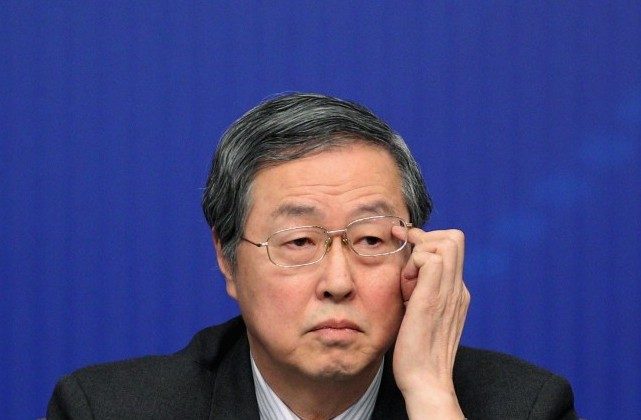 Zhou Xiaochuan, governor of the People’s Bank of China, attends a press conference of the Fifth Session of the 11th National People’s Congress focusing on monetary policy and financial issues on March 12 in Beijing. The majority of the People’s Bank of China’s stock is considered non-tradable stock and still owned by various official institutions, raising questions about their degree of separation from communist authorities. (Feng Li/Getty Images)
China

The Chinese banking sector is often thought to be among the wealthiest in the world. A number of experts, however, disagree, pointing to how the Chinese lending sector is on the edge of bankruptcy—there are large numbers of non-performing loans, and defaults are expected.

“Others are concerned that many of China’s banks may be insolvent and that China may experience a financial crisis. According to these commentators, efforts to resolve a serious accumulation of non-performing loans (NPLs) only disguised the problem,” stated a Congressional Research Service (CRS) report, released on Feb. 20. The CRS is part of the Library of Congress and provides policy and legal analysis for the U.S. Congress.

Additionally, credit analysts are concerned that the Chinese regime’s 2008 stimulus program may have aggravated Chinese banks’ NPL situation, given that local Chinese administration debt jumped by a ballpark figure of around $1.7 trillion, according to the CRS.

“The amount of non-performing loans among Chinese lenders will continue to rise in 2012 after picking up in the fourth quarter [of 2011],” according to a March 2 article on the China.org.cn website.

Loan defaults in China have been on the rise and may increase by 26 percent this year, according to an article on the Quamnet website.

“Banks have been asked to roll over loans to local government financing vehicles, and have also been asked to increase their tolerance of NPLs by enterprises to shore up the economy,” according to the China.org article.

“After several years of growing profitability and improved finances, China’s banks appear to be poised for a rise in NPLs, particularly if there is a sharp decline in real estate values,” according to the CRS report.

Besides real estate loans, China experts suggest that local administrations will default in droves. They don’t have the funds to repay the loans they took out over the past years, as much of the money was squandered or embezzled, according to media reports.

“As the repayment capacity of loans extended to local government investment vehicles comes under threat, we continue to expect instability in China’s banking system and a surge in non-performing loans,” according to a recent report overview of the article “China 2012—From Miracle to Meltdown” on the Companies and Markets website.

Chinese bank observers advise that “unresolved NPLs of the past, newly-emerging NPLs associated with a recent sharp rise in local administration debt, and hidden exposure to underground banking have increased the likelihood that China’s banks may experience a rise in NPLs and, in some cases, edge towards insolvency,” according to the CRS report.

Instability in the Chinese Financial Sector

“Despite the many reforms introduced so far, the Chinese financial system remains repressed, unbalanced, costly to maintain and potentially unstable,” according to the recently released 400-page World Bank Report “China 2030.”

The report suggests that China’s financial sector is constrained by state ownership and regime interference. The Chinese state uses the financial sector to enforce its policies, preventing lending institutions from becoming a true market force.

“Banks have been used as instruments of the government’s macroeconomic and sectoral policy goals and have not always been in a position to lend prudently. While this may have facilitated accomplishment of policy goals, it has also exposed banks to a greater risk of deteriorating loan portfolios,” according to the World Bank report.

Given the financial sector’s lending practices to China’s corporate sector, accounting for 90 percent of all funds borrowed by Chinese firms, the Chinese financial system is lopsided. Besides, the Chinese securities market is underdeveloped, and a Chinese firm has few options in accessing a mechanism for long-term private funding.

Without costly money injections by the Chinese regime, China’s banking sector would have collapsed, and a financial crisis similar to the 2008 economic global crisis would have ensued on Chinese soil.

What is ailing the Chinese banking sector is the absence of a strong regulatory system that could monitor, predict, and address financial risks. The Chinese regulatory environment is in its infancy and leaves the Chinese financial system in a precarious state.

“The financial system is fragile and vulnerable to potential instability,” the World Bank report states.