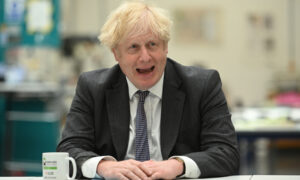 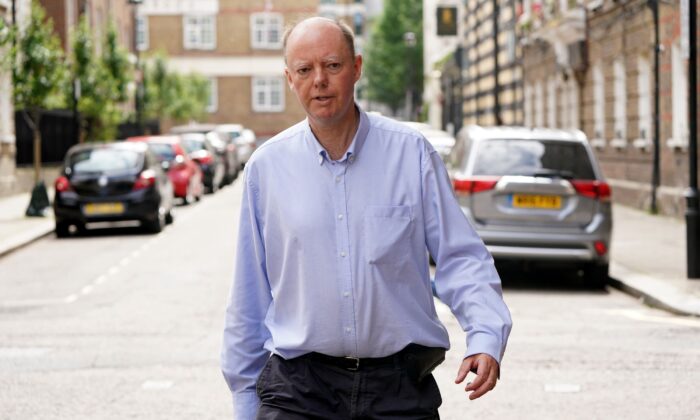 The footage shows two men jeering as they grab hold of Whitty, who appears to struggle to free himself.

At one point one of them can be heard saying, “One photo please?”

With a line of police vans visible in the background, a voice is heard saying “leave the gentleman alone” before the clip ends.

Whitty became a household name during the early period of the pandemic when he regularly appeared alongside Prime Minister Boris Johnson giving televised briefings and fielding questions on the scientific advice behind the UK government’s pandemic response.

Security specialist Will Geddes told The Epoch Times that he was “astonished” that Whitty did not have a personal protection officer of some kind.

Regardless of whether the men’s motive was to innocently obtain a selfie or to frighten and harass Whitty, it would have been a “very traumatic and frightening episode.”

“This in itself raises some serious concerns about the absence of any kind of personal protection officer, which I would have thought in these somewhat inflammatory times should evidently be present,” Geddes said.

Home Secretary Priti Patel told The Times of London she couldn’t comment on whether Whitty needs security, but said, “It’s important that we make sure that Chris is given the right kind of support.”

The Metropolitan Police told the Epoch Times in an emailed statement,”Officers were in the vicinity policing a nearby demonstration and intervened when they saw what was happening.”

“They spoke to the victim and checked his welfare. He had not suffered any injuries and informed officers that at that time he did not wish to make any allegations.”

The Met says details of the two men were recorded, and they were “robustly” warned about their behaviour.

“The incident has been recorded as a common assault and continues to be investigated by the Met’s Public Order crime team.”

Geddes said that in his experience of protecting public figures the advent of smartphones and social media has fuelled the growth of such incidents.

“We’ve seen a real amplification of those that are wanting to achieve, obviously, notoriety or fame or recognition or exposure by posting certain content on their social media. Now, inevitably, you see those that are upping the ante every single time to get even more controversial postings or video footage,” he said.

He said that in the security industry, they look at whether someone is in the public domain to assess risk, not whether their notoriety is by accident or by design.

“I’ve certainly protected many people who fall within the same category as professor Whitty, who have maybe embraced that initial role, feeling that they are contributing their experience, their expertise, to the better good of everybody around them,” he said.

It is not the first time Whitty has been forced to endure public harassment.

Earlier this month, he was confronted in a street in Oxford by a man accusing him of lying to the public about the CCP (Chinese Communist Party) virus, while in February a man accosted the chief medical officer when he was walking in Westminster.

The men filmed the incidents on mobile phones.

Geddes said that he hopes Whitty was offered a protection officer after the incidents. When people decline protection, he said, it is often because they don’t understand what it is and that it can be delivered in a “very non-intrusive, privacy respecting way.”

MPs from across the political spectrum have condemned the actions of the men in the video.

Prime Minister Boris Johnson said he was “shocked at the video.”

“I condemn the behaviour of these thugs,” he wrote on Twitter. “Our hard-working public servants should not have to face this kind of intimidation on our streets and we will not tolerate it.”

Whitty brushed off the February incident, addressing it at a Downing Street press conference shortly afterwards.

He told viewers: “In terms of being harangued … the odd young lad showing off occasionally happens. I didn’t think anything of it, frankly. I was very surprised it was picked up by the media at all, as anything of any importance.”