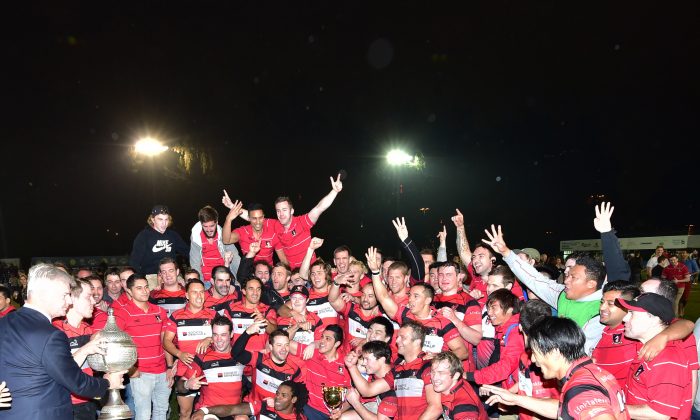 HONG KONG—Societe Generale Valley defeated Leighton Asia HKCC 18-15, to win and defend the Grand Championship final at Kings Park on Saturday March 7. It was an entertaining, close fought match, with both sides providing rugby that was an excellent advert for the game in Hong Kong.

Valley deserved victory, and the scoreline flatters HKCC with their last minute try and conversion, which was too little too late. The Valley game management was superior. Their defence resolute and the cornerstone of victory, hardly a tackle was missed, and along with a powerful scrum and forward game they were able to turn pressure into points: a crucial difference between the two teams.

HKCC will wonder how, with the talent in their backs, their control of the lineout, they did not make territory and possession turn into points. They had chances, but Jason Kjestrup had a poor game from the kicking tee, missing vital penalties at key moments in the match.

HKCC dominated the opening 10 minutes. The game was played at pace, and HKCC tried to make quick ball count. It was Valley that got the first points on the board, with Ben Rimene, demonstrating ominous accuracy from the tee to edge Valley out to a 6-0 lead, before HKCC managed to claw a penalty back to make it 6-3.

It was Valley who scored the first try. The impressive, Leon Wei barrelled over from 5-metres, after a period of pressure, where Valley made it clear which team had the upper hand with the scrum.

The score was 13-3 to Valley at half time: HKCC had scant return for their dominance of territory and possession. Valley had made the most of every opportunity.

That pattern continued in the second half. HKCC started strongly, and scored a well-worked try finished by Danny Atamu. The conversion was missed. The scoreline was now 13-8, with game momentum shifting to favour HKCC. For the next 20 minutes, HKCC dominated and Valley defended. The penalty count favoured HKCC, but they could neither score nor capitalise on territory. And the turning point in the game came in the 65th minute, when a kickable penalty bounced under, not over the crossbar. At that point belief in victory subtly shifted to Valley.

In the 75th minute that belief turned into reality with a try by Andrew Kelly, after the Valley pack had created a scoring opportunity close to the HKCC tryline. And at 18-8, Valley sensed victory.

HKCC attacked in the final stages, and Angus Cameron scored an impressive individual try, after a period of good back play by HKCC. It left HKCC thinking what could have been, as it was the final play of the game. It bought the scoreline to 18-15, signaled the end of the match, and victory to Valley.

After the match Valley head coach, Jack Isaac summed up his feelings: “It was a roller coaster ride. We had a good half and then they played a bit of Rugby, they came out in the second half and really tried to throw the ball around, put us under a lot of pressure, but I think it’s a massive credit to our defence. The boys really stuck to their guns.

“We probably shut down a bit in attack, but in the end it did not matter in the final as we had enough points. I think it is a real credit to the guys because they have put in such a huge effort, got this far and to get to this title. I am really pleased for the boys and just really proud of their effort they have made to get here.”

Isaac was pleased to get the 75 minute try under their belts. “That was what was frustrating, we knew we had a better ball in hand and if we put our rugby together we could put them in trouble. But we just went into a defensive mode a bit too long in the second half and let them back in the game, and just made it hard for ourselves.

Commenting upon the large number of penalties against Valley he explained: “Yes but that is often the case when you are defending and defending, and they were playing positive rugby. It’s a bit of a shame that we didn’t stick to our rugby a bit more and we went too much into defensive mode in the second half, but it was a great defensive effort from that point of view anyway so it was great performance all round.

“Yes, they did miss a lot of points, but it happened to us when we played against them earlier this year, we missed a lot of points, so this time it was lucky for us. That’s rugby, that’s the way it is.”

Grahame Carder is a rugby enthusiast and former player from representative Schoolboy level, through University and most corners where he’s lived. Currently works as a Consultant on Strategy and Marketing.