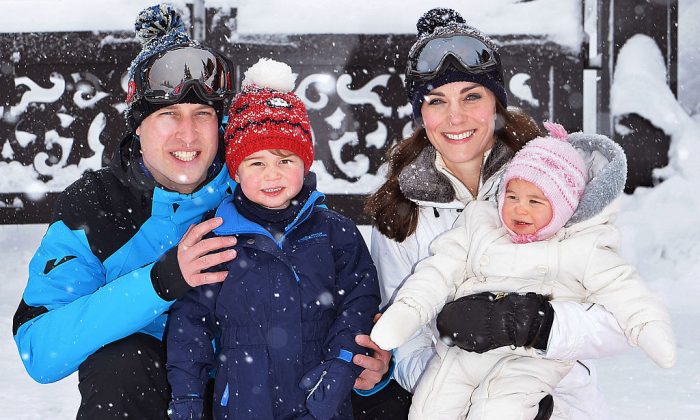 FRENCH ALPS, FRANCE - MARCH 3: (NEWS EDITORIAL USE ONLY. NO COMMERCIAL USE. NO MERCHANDISING) (Alternate crop of #514133584) Catherine, Duchess of Cambridge and Prince William, Duke of Cambridge, with their children, Princess Charlotte and Prince George, enjoy a short private skiing break on March 3, 2016 in the French Alps, France. (Photo by John Stillwell - WPA Pool/Getty Images) (TERMS OF RELEASE - News editorial use only - it being acknowledged that news editorial use includes newspapers, newspaper supplements, editorial websites, books, broadcast news media and magazines, but not (by way of example) calendars or posters.)
Royals

Prince George is out of the “terrible twos.”

The first child of Prince William and Duchess of Cambridge Catherine Middleton celebrates his third birthday on Friday, July 22. Let’s take a walk down memory lane, albeit a short one.

It was three years ago when the royal family exited St Mary’s Hospital, Paddington, with baby George in the arms of his mother, Catherine.

A few months later, the family christened Prince George in a private ceremony among close family and friends.

George joined his parents in New Zealand on the first day of a Royal Tour to New Zealand and Australia—the first official trip overseas as a family.


The Royal Family took George to a zoo in Australia.

July, 2014, was a time of firsts for Prince George, including a visit to the Natural History Museum in London to mark his first birthday, where he visited the Sensational Butterflies exhibition.

Prince George is about to meet his sister, Charlotte, the Princess of Cambridge, for the first time.

It’s his turn to be a spectator—Prince George arrives at church to witness the christening of Charlotte.

Family fun time in the snow.

Prince George welcomed President Barack Obama and First Lady Michelle into his home and remained comfy in his robe.

More firsts for George, who attended his first Royal engagement with his parents this year.

It’s only up from here—Happy Birthday Prince George!