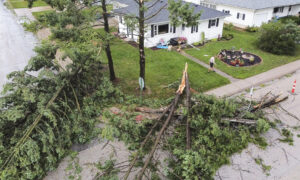 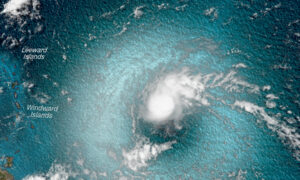 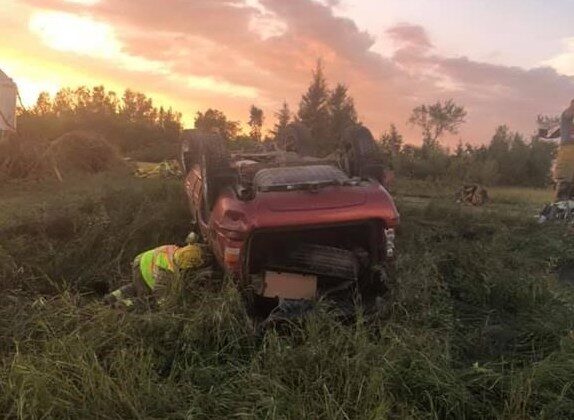 A first responder checks on an overturned vehicle at the scene where a tornado touched down, uprooting trees and overturning two vehicles near Virden, Man., Aug. 7, 2020. (The Canadian Press/HO-Wallace District Fire Department)
Canada

DEN, Man.—James Blacksmith closes his eyes and goes back to the moment he saw a pine tree viciously uprooted from the earth and topple onto his Jeep’s roof.

Within seconds, the windows burst from the force of a deadly tornado and the Manitoba man struggled against wind and spiraling glass to hold his head down.

“If that tree hadn’t landed on me, I think that tornado would have done more damage,” Blacksmith says. “I probably wouldn’t be sitting here talking to you right now.”

It’s difficult for the 54−year−old from the Sioux Valley Dakota Nation to reflect on the traumatic evening of Aug. 7 on a farm near Virden. It’s especially hard remembering the white truck with a teenage couple inside pulling up beside him beneath the trees.

Shayna Barnesky and Carter Tilbury, both 18, were killed when their truck was swept up by the twister and landed a kilometer away. RCMP have said the teens from Melita, Man., were thrown from the vehicle.

Environment and Climate Change Canada recently upgraded the rating for the tornado to an EF−3 on the five−level Enhanced Fujita Scale, with estimated wind speeds of 260 km/h.

Blacksmith thinks back on the signs in the sky that night. He had been at his brother’s house nearby and was driving home along Highway 83 around 8 p.m. There were some clouds, but most had passed towards the east.

A remaining black patch of menacing clouds sat right above the highway. As Blacksmith got closer, he noticed rings in the clouds, but couldn’t see if they were rotating.

Suddenly, a big piece of hail hit his Jeep, so Blacksmith thought it was safer to get off the road.

He pulled onto a farm property and under a row of pine trees hoping to shield his vehicle from an onslaught of hail. A white truck, which had been travelling the other direction on the highway, followed him in.

“I took a look over to my left to where he parked. He started backing up pretty fast. By the time I turned around and looked upwards, that’s when the tornado hit.”

The next few moments are a blur. The tree landing on top of his vehicle. The windows blowing out. The twister eventually tossed the tree off, and the Jeep started tumbling and tumbling with Blacksmith inside.

It came to a stop on its roof. As quickly as the tornado had started, it was over, Blacksmith says.

Nearby storm chasers and first responders rushed to the farmyard where damaged equipment was strewn across the property. Blacksmith honked his horn to indicate he needed help.

Crews had to wait for the power lines to be turned off before they cut off the Jeep’s driver’s door and helped him free.

Blacksmith was taken to hospital. He spent four days being treated for a fractured vertebra, scrapes, and bruises. While the pain persists, Blacksmith says he knows the outcome could have been different.

Wild weather isn’t uncommon in southwestern Manitoba and many farmers have tales of bins being thrown and barns toppled. The deadly tornado was not the first Blacksmith had encountered—or even the most recent.

But a death, let alone two, is rare. The last was in 2018 when a 77−year−old man was killed in a tornado in Alonsa, west of Lake Manitoba.

Less than a week after surviving the tornado, Blacksmith saw the telltale dark sky forming while he was driving with a family member near the community of Alexander, 50 kilometers east of Virden. Blacksmith says he was much further away when the twister touched down.

Blacksmith says there’s also the time seven years ago when a tornado tore off part of his roof. The twister that tore through Sioux Valley First Nation in 2013 also ripped a home from its foundation and sent two people to hospital.