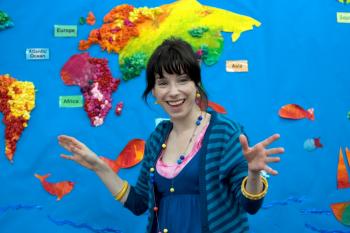 Hawkins as Poppy in a scene from “Happy-Go-Lucky.” (Simon Mein/ Courtesy of Miramax Films)
Entertainment

If you are one of those people irritated by perky types, this is not the movie for you. A strange Pollyanna-like optimism foils the cynics in director Mike Leigh's latest take on the human condition. Either you love that optimism, or it will rub you the wrong way. If you study the director's work, you'll be rubbed.

Pauline "Poppy" Cross, played by Sally Hawkins, is a care-free and chronically smiling primary school teacher from North London. Her manner is to attempt to brighten everyone's day with sunshine despite the dreary London skies. When her bicycle is stolen, she muses "didn't have time to say goodbye," and enrolls in driving school to turn the corner (so to speak) on her transport needs. Cheeriness is her defense against life's woes and her gift to the world.

If you know Leigh's repertory, you know that darker human nature is always intermingled with the good in people. In Vera Drake, a cleaning woman's abortion practice leaves less than a rainbow. In Naked, a volatile drifter seems to poison everyone he touches. If you know Leigh, you know the infectious humor of the first ten or so minutes will not last.

The first intrusion of Leigh's dark side is an encounter with a moody bookseller who refuses to exchange pleasantries with Poppy. This is one Poppy cannot win over. From that juncture we see Poppy up against negativism stemming from the unhappiness of people’s comings and goings in her life. Her passionate Flamenco teacher has a comically-measured eruption in class. Her outburst is forgivable weighed against her love of life—in Poppy fashion.

We cannot say the same for other characters. A troubled little boy, a student of Poppy's, beats up on his classmates due to his mother's boyfriend's beatings. Poppy intervenes and asks a social worker (Samuel Roukin) to vet out the boy's feelings. This man, Tim, becomes Poppy's boyfriend, in a relationship remarkably absent of troubles. Perhaps there really are people in the world with only good intentions, you might think.

The journey gets darker. Poppy seeks out a schizophrenic homeless man living under a bridge to give him solace. At this point goodness is not enough to excuse the life-threatening peril Poppy gets herself into. She is well-intentioned and a momentary bromide to this disturbed man, but she only applies band aids. Some problems are just too deep for do-gooders to solve.

Enter Scott, Poppy's violently angry-at-the-world driving instructor. He is her foil, the demon to Poppy's angel. Eddie Marsan portrays this troubled and sexually-frustrated white-supremacist with decreasing hold on sanity. His explosion scene carries more than just anger—it is rage of an unknown origin you can read in the taught muscles and red eyes of this awful yet deep rebel. It's a performance that should have garnered the Silver Berlin Bear award from the Berlin Film Festival, taken home by Hawkins instead.

Leigh's history includes films in which character comes from a combination of good and evil. Take Vera Drake, a woman with "a heart of gold," seemingly with nothing but love for everyone, who is an illegal abortionist on the side. She is convicted of endangering the life of a "patient" for her seemingly innocent aid, much the way Poppy endangers herself when "treating" the homeless man. Johnny, the drifter on the run in Naked is violent and abusive to everyone, yet he makes sense at times in his quasi-philosophical rants. He says good cannot exist without evil, and God creates evil in the world. That resonates in Scott's one single moment of clarity, when he goes on about left-brained and right-brained people. He says society tries to enforce left brain thinking, and that right-brained people are oppressed.

Vera Drake gets the pen for her hopeless optimism. If Leigh means us to use Poppy as a role model, he is contradicting human nature and himself. A Poppy may be refreshing, but she is no match for a Johnny or a Scott. Even in Life is Sweet, Leigh's brutally honest take on London's working class, the lovable eccentrics reveal their anger and frustrations. They work through them, however; Polly does not. Yes, she has a very caring nature, and moments of serious insight without the humor, but she always settles on the flat line of cheeriness.

Poppy can surely say 'en garde' against the hair trigger bitterness of her sister, Suzy, who would rather play Playstation than study law. She can try to shake her ready-to-deliver sister Helen out of suburban bliss, yet she is no match for the complexity of Scott or Leigh's other misfits. Give me the angel-demon of Scott. Give me the blather of the homeless man, hinting at the divine speaking in tongues. Please don't give me a character without faults. Who can believe her?