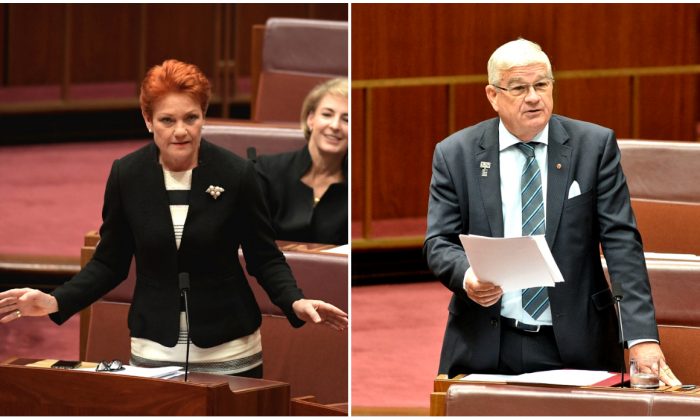 Pauline Hanson says United Australia Party senator Brian Burston needs to “get some anger management” after trading verbal barbs and fisticuffs with her chief of staff.

The ugly physical clash occurred outside a formal dinner at Parliament House, just hours after Senator Burston and the One Nation leader accused each other of sexual misconduct.

“I think it’s retaliation and it’s a shame this is happening in parliament,” Senator Hanson told reporters in Canberra on Feb. 14. “He really needs to go and get some anger management.”

Bill Shorten said One Nation was once again descending into chaos.

“It would be comic-except it’s not-it’s violence and unparliamentary conduct,” the Labor leader told reporters.

But it was no laughing matter when Senator Burston came toe-to-toe with her adviser James Ashby on Wednesday night.

Senator Burston claims Mr Ashby approached him as he and his wife were leaving a function.

He claims he was injured when he tried to grab a phone Mr Ashby was waving in his face.

“I told him to [expletive] off,” Senator Burston told News Corp.

“I lost it. I grabbed him and I pushed him up against the wall.”

Senator Burston reported the incident to Australian Federal Police and supplied a photograph of his bloodied hand to News Corp.

Senator Burston outed himself as the mystery alleged culprit, telling News Corp it was “[expletive],” going on to claim he left One Nation after being sexually harassed by Senator Hanson.

“Right back when we had our first One Nation AGM at the Rooty Hill RSL (in Sydney in 1998), that was the first time she hit on me,” he said.

He claimed Senator Hanson had once “rubbed her fingers up my spine” while listening to the national anthem and propositioned him after he was elected in 2016 at her home in Queensland and in Canberra.

Mr Ashby claimed he was taking pictures of his boss leaving the function when Senator Burston attacked him.

Senator Ryan has spoken to House of Representatives Speaker Tony Smith about the physical clash between Senator Burston and James Ashby outside a dinner at Parliament House on Wednesday.

“We will be looking into this matter as a matter of urgency. We both regard this as a grave matter,” Senator Ryan told parliament on Thursday.

The Senate president said if he didn’t report back to parliament on Thursday for legal reasons, he would aim to address an estimates hearing on Monday.

“At this stage I have received no formal information on it but we will be chasing this up in the course of this morning and I plan to speak to senators involved,” Senator Ryan said.

He said a range of issues were raised by the incident including the use of media, assault claims, and potential privileges concerns around senators being prevented from going about their business.

Mr Ashby filmed Senator Burston in the lead-up to the altercation, which left the One Nation defector with a bandaged hand when he arrived at work on Thursday.

But it’s rare to see their confrontations become physical.