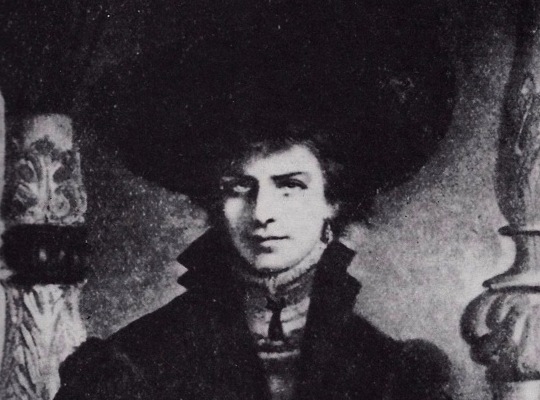 A detail from a photograph of the Countess Elga portrait taken in 1907. (The Occult Review September, 1909)
Art Speaks

He was the darling of Viennese high society. By the time Hans Makart was approaching the age of 40, he had attained the pinnacle of fame as a portrait painter in a city that was at the crest of its reputation as a focus of European wealth, power, arts, and sciences.

Makart, born in 1840, had trained under famed realist Munich artist Karl Von Piloty. Makart moved to Vienna and rapidly became the favorite of the Hapsburg royals.

Makart’s studio was the place to be seen and to be the subject of one of his hauntingly beautiful portraits (Fig.1) was the sign of arrival at the height of Viennese society. Young, handsome (Fig.2) and spectacularly successful, Makart was the rock star of his day.

Then something went horribly wrong. In August of Makart’s 44th year he went suddenly and hopelessly insane. By early October of the same year he was dead.

Such was his fame that the death was reported as far away as New York. No explanation for the sudden onset of insanity was ever given, and the history of the brilliant young man who influenced Klimt and others will forever remain a mystery. Or will it?

Makart’s art today resides in major museums throughout the world. Yet there is one disturbing portrait that appears only as a black and white image in, of all places, a journal called The Occult Review of 1909. While no connection can be made between the portrait and Makart’s death, it does raise disturbing possibilities.

Vienna of the 1880s was also playing a major role in the Germanic occult revival. By 1909, Guido von List was writing about an ancient Germanic history, and also practicing blood magic in order to create a homunculus!  Defrocked priest Lanz von Liebenfels was publishing anti-Semitic rants and demanding action to purify the Aryan race. One of his readers was the young Adolf Hitler.

Such activity may have been the reason for the presence of German occult researcher Dr. Franz Hartmann in Vienna in June of 1909. Four months later, in an article in London’s The Occult Review, Hartmann relates how he read a report in that day’s Neues Wiener Journal of the burning of a castle in the Carpathian mountains of Romania by villagers who were convinced that the recently deceased owner, a Count, had returned as a vampire.

It just so happened that Hartman was with a man who had been at this same castle not two years before. The man was another occult researcher. He told Hartmann that the castle was reported to be haunted.

The unnamed researcher found a portrait in the castle that seemed animated and decidedly evil. He and two companions were told that the portrait was painted by Hans Makart in Vienna and may have been of the Count’s daughter, the Countess Elga, also recently dead. That night the youngest of the three men received a visit from the dead Countess!

Hartmann recorded other strange visitations and events during séances at the castle. They left a few days later, after photographing the portrait. Hartmann wrote his account of this conversation and reproduced the photograph as well (Fig.3)

The picture is readily identifiable as the work of Makart, or at least a competent copy, as was suggested by the caretaker of the castle. It shows an elegant young woman dressed in dark furs and a dark, wide brimmed hat. She is sitting, hands clasped in her lap, between two columns with molded floral motifs. The style and the evident dark tones are consistent with many of Makart’s works. The frame of the painting is also consistent with the style of frame used on other Makart portraits.

A survey of Makart works shows no sign of the original. If, as the newspaper report suggests, the castle was burned with its contents, it can be assumed that the painting was destroyed in the fire. There is the tantalizing possibility that the engineer’s photograph is of a copy, in which case the original may still exist. Makart would have painted the portrait prior to his death in 1884. Countess Elga died young shortly before 1907. It can be implied from her appearance that her portrait was one of his last works. Dr. Hartmann was a respected researcher and if his report is to be believed, we can only wonder if it had some connection with Makart’s sudden death.

Mark Newell is a writer, anthropologist, and award-winning graphic artist with an interest in the history of art and especially the Medieval and Renaissance periods.  He can be reached at marknewell@mac.com. Newell is currently editing is third novel based in part on the Harttmann account.