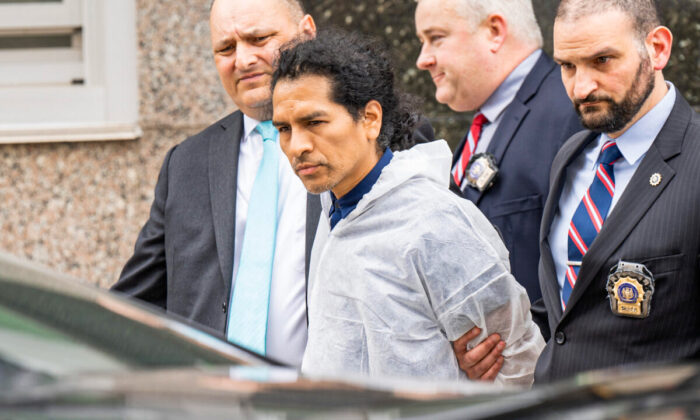 NEW YORK—The knife-wielding handyman accused of stabbing his married lover dozens of times during a lethal late-night fight inside her Queens home was living illegally in the United States, immigration officials said Friday.

David Bonola, held in custody after a Thursday night court appearance in Queens, was named in a detainer notice filed by U.S. Immigration and Customs Enforcement (ICE) in Queens Central booking. The murder suspect arrived in the United States about 20 years ago.

“ICE focuses its civil immigration priorities on the apprehension and removal of non-citizens who pose a threat to our national security, public safety and border security,” said an ICE spokesman.

The 44-year-old Mexican citizen was arraigned on a felony murder charge in the savage stabbing that killed his on-and-off paramour of two years after an argument inside her Forest Hills home.

A detainer notice indicates immigration authorities believe Bonola is in the country illegally. The notice amounts to a request that state authorities turn him over immigration agents when appropriate.

Prosecutors released additional details in the case at the suspect’s first court appearance, noting that victim Orsolya Gaal let him inside her tony Tudor-style home when he arrived around 12:40 p.m. on April 16.

Her husband and their 17-year-old son were away visiting college campuses on the night of the brutal killing, while their 13-year-old son was asleep upstairs when Bonola stabbed Gaal close to 60 times.

“The defendant and victim were known to each other,” Assistant District Attorney Josh Garland told the court at Bonola’s Thursday night arraignment. “The defendant went to the victim’s residence between 12 a.m. and 4 a.m.

“Because she knew him, she let him into the house. He then engaged her in a verbal dispute and unfortunately she had to ask him to leave multiple times.”

The killer refused to leave as the spat morphed into a violent assault where authorities charge Bonola grabbed a steak knife and fatally stabbed the 51-year-old Gaal. He then stuffed her body into a hockey equipment bag and dragged the victim to a nearby park, leaving a blood trail for investigators.

Bonola, due back in court Tuesday in the killing, faces 25 years to life in prison if convicted.