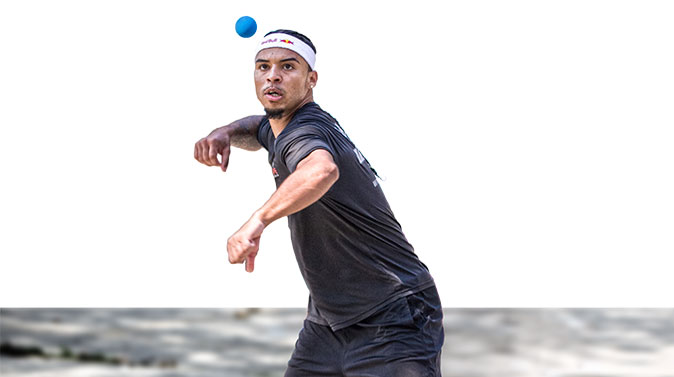 Handball Crowns the King of NYC

Deeply rooted in urban culture, the sport bestows notoriety to its best, and transforms lives for the good
By Annie Wu and Petr Svab
Share
FacebookFlipboardTweetRedditEmail
MOREPRINTFONT BFONT S

NEW YORK—With over 2,000 handball courts in New York City, it is the handball capital of the world.

It’s the reason why some of the best players in the world are from the city, said Tim “Timbo” Gonzalez, 22, who won the King of the Courts tournament held at the Joseph Austin Playground in Jamaica, Queens, on Sunday, July 27.

The singles tournament decides who is the best player in the city each year. “To be crowned king in New York City is a big deal,” said Gonzalez, who won the final game 20–6, and the $2,000 prize. He grew up playing in courts in Kingsbridge, the Bronx, and went on to win the World Games handball championship in Colombia last year.

He said he picked up the sport to keep off the dangerous streets of the Bronx neighborhood he grew up in. “It helped me stay away from the street violence, the drug dealers,” he said.

Being surrounded by negative influences wasn’t easy. “There was a lot of pressure, people saying you’ll never be great. But you just have to overcome that and be positive.”

The pastime of using bare hands to bounce a ball off a wall dates back to at least the 15th century. The modern version of the game appeared at the end of the 19th century, when tennis balls were used.

There are several varieties of the game, like Australian, Gaelic, and Chinese handball. The American version has one, three, and four-wall versions played one-on-one (singles), among three (cutthroat), or two-on-two (doubles).

New York City’s particular brand of one-wall handball developed from beachgoers who bounced tennis balls against wooden jetties near the South Brooklyn beaches, according to the U.S. Handball Association. In the 1930s, the city parks department put up courts throughout the five boroughs, setting the stage for the sport to flourish.

One of the attractions of the game is its convenience. The only equipment needed is a ball and a concrete wall, and it doesn’t cost to use a court.

“This is such a New York game,” said William Polanco, 38, a four-time world champion in handball doubles. He was teaching at an outdoor handball workshop, called Hitting Walls, that also took place Sunday, at the Thomas Greene Playground in Gowanus, Brooklyn.

Many players find there’s something satisfying about smacking the ball with one’s hands.

“It helped me channel my aggression,” said Polanco, who’s known as “Lefty Willie.” “It’s like my anger management.” He grew up in Sunset Park, Brooklyn, and has played handball since he was 13.

King of the Courts

Organized by the St. Albans Handball Association annually since 1997, this year’s King of the Courts tournament was held over two days for the first time—to accommodate the more than 100 players who signed up to compete, said vice president of the association, Karen McConney.

The tournament organizes each player into different matches, with the winner of each match advancing until the final game. A separate tournament for women, called the Queen of the Courts, is held at another time.

Certain courts in the city, like those in Coney Island in Brooklyn and West Fourth Street in Greenwich Village, Manhattan, are known as the meccas of the sport—where the best gather to play.

Josh Garcia, another player who was among the top seated players at Sunday’s tournament, said a tight-knit community forms around the courts that one grows up playing in. Garcia, 20, began playing at the courts in Sunset Park, Brooklyn, where he grew up. Champions like Ray Lopez and John “Rookie” Wright mentored Garcia at a young age.

Groups form among players from the same borough, and they cheer for each other during games. “It’s like a secret society,” Garcia said, who is known around handball circles as “The Assassin.” Nicknames are usually assigned by other players and enthusiasts—often based on the person’s playing style, or a memorable detail about the person.

“You have to earn the name. You win a tournament, and then it sticks,” Garcia said.

At Sunday’s tournament, Garcia was shaking hands and saying hello to every other person who walked by. He said the handball community is so close, “I could leave handball for five years, and it’d be the same people.”

Raul Fantauzzi, a former top player during the 1980s who came to watch the tournament on Sunday, said that once you became the best of the best, you would become famous among the poor communities in the city where the sport was often played.

“If you didn’t have money to buy a racquet, or join a baseball team, you resorted to handball, because it was free,” he said. He himself picked up the sport when he saw people playing in onetime crime-ridden Bushwick, Brooklyn, where he grew up.

Fantauzzi, who later coached handball teams at public schools in Greenpoint for 30 years, has witnessed the sport transform young people’s lives, enabling them to break free from their difficult surroundings.

“Some kids didn’t want to go to school. But now, they’re doctors and professors,” he said. For others, the sport became an obsession that overtook everything else in their lives. Fantauzzi made sure to tell them to prioritize education first.

Fantauzzi still keeps in touch with top players from his days. “A lot of these guys will be in your life forever,” he said. He plays handball on the weekends at the West Fourth Street court, despite being close to 60.

Today, many more people from different backgrounds play the sport, Fantauzzi said. He also noted that today there are corporate sponsorships, more players, and the Internet, which has brought enthusiasts together more easily than the days when news spread mainly through word of mouth.

The game has been growing faster over the past five years, said Polanco, the former handball champion. The sport has gained popularity through social media and initiatives in other countries.

As a member of the U.S. Handball Association, Polanco traveled the world, teaching and promoting the game in France, Spain, and Ecuador.

He promotes handball as an easy way to engage youngsters. “If they don’t have anything else better to do, play handball,” Polanco recommends. “Don’t do anything bad and also stay in school.”

Source: The New York City Department of Parks and Recreation

There are over 2,000 handball courts in the five boroughs maintained by the city’s parks department, many dating back to the 1930s. Courts in Coney Island, Brooklyn and West Fourth Street, in Greenwich Village, are known as the meccas of the sport—where the best gather to play.