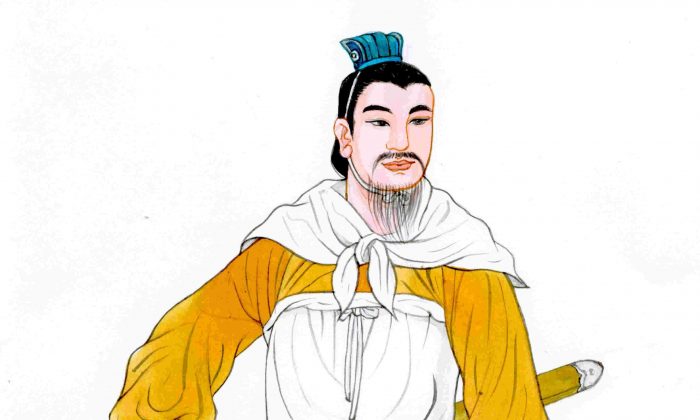 Han Xin, One of the ‘Three Heroes of the Early Han Dynasty’

A military strategist with a rare genius, he is known for never having suffered a single defeat. Han Xin is considered one of the “Three Heroes of the Early Han Dynasty” (漢初三傑), along with Xiao He (蕭何) and Zhang Liang (張良).

Han Xin lost both his parents at a young age and was very poor. He often had to rely on others for food or resort to catching fish to sell in order to buy food. Thus he often suffered disdain and discrimination.

However, in a well-known story, he also met with kindness. One of the women who did laundry by the river shared her food with Han Xin for several days and Han Xin promised her he would repay her some day. Indeed, when he returned to his hometown later with great honour and wealth, he gave her 1,000 pieces of gold.

Despite being poor, Han Xin diligently studied military strategy and had lofty ambitions. He also displayed exceptional character from a young age. There is a famous story about Han Xin demonstrating great ability to endure humiliation.

Skilled in martial arts, Han Xin often carried a sword. One day he was stopped on the street by a ruffian who insulted him, saying: “You look like a coward. If you are not afraid to die, then kill me with your sword. If you don’t dare, then crawl between my legs.”

Han Xin knew he would not be able to draw back if he were to fight the bully. He also knew that he would have to pay with his own life if he killed the man. Therefore, instead of trying to prove his skills, he decided to crawl between the man’s legs. All the onlookers laughed at him.

Later, Han Xin often reminded himself of this incident to stay motivated to realize his ambitions.

This story became the idiom “the humiliation of crawling between the legs” (胯下之辱) and is used to refer to a heart of great forbearance—an important virtue possessed by those who accomplish great achievements.

When Han Xin later returned to his hometown, he did not seek revenge on the man who had bullied him, but even granted him a position in his army.

In 209 B.C., peasant rebellions broke out across China against the corrupt rule of the Qin Dynasty (秦朝), throwing China into chaos.

When the Qin Dynasty fell in 206 B.C., the powerful military leader Xiang Yu (項羽) established himself as the Hegemon-King of Western Chu (西楚霸王) and ruled over a vast territory.

Han Xin offered to serve in Xiang’s army but was only given a low-level position as a guard. He left for the much weaker Han (漢) state, ruled by Liu Bang (劉邦).

Xiao He, the Han prime minister, recognized Han Xin’s qualities as a great general and strongly recommended him to Liu, but Liu repeatedly rejected his advice and only gave Han Xin a low-level position to manage supplies.

Disheartened, Han Xin departed the Han state late one night. Upon hearing this, Xiao hurried after him and persuaded him to return.

Xiao told Liu: “Han Xin has unparalleled talent. If you wish only to remain king of Han, then you do not need him. But if you wish to rule all of China, only Han Xin can devise a way to do so.”

Toward a New Dynasty

Within a few years, in 206–202 B.C., Han Xin used innovative military strategies to achieve major victories, conquering many states and finally winning a decisive battle between the states of Han and Chu.

Han Xin first conquered the state of Yong (雍) with a plan that included sending many soldiers to repair a destroyed road. This led Yong to believe that no attack could be launched until the repair was completed. Han Xin then launched a surprise attack.

In 202 B.C., Xiang Yu commanded 100,000 Chu troops to attack at the Han front. Han Xin responded by first ordering his midsection troops to withdraw slightly, followed by spreading out both wings to launch a flank attack. He then commanded the midsection to push forward, thus completely surrounding the Chu troops.

At night, Han Xin ordered his troops from all sides to sing songs of the Chu state. Chu’s troops lost their fighting spirit and were soon annihilated. Xiang Yu committed suicide and the five years of war between Chu and Han ended with Liu Bang conquering all of China.

Han Xin indeed proved to be the brilliant military strategist that Xiao predicted, and his principles of maneuvering troops were highly praised by later strategists. According to historical records, he produced three chapters on the art of war, but they have all been lost.

Liu Bang granted Han Xin the title of King of Chu and later established himself as the first emperor of the Han Dynasty. He was later referred to as Emperor Gao of Han, or Han Gaozu (漢高祖).

Han Xin is greatly respected by later generations for his wisdom, character, and achievements. He is also known for his forbearance, loyalty, courage, and forgiveness.

Han Xin’s loyalty was demonstrated by his refusal to abandon his service to Liu Bang and establish himself as ruler of an independent territory, despite several attempts by others to persuade him to do so.

It is said that he once responded, “My gratitude to the Han King is extremely deep. He allows me to ride in his own chariot, gives me his clothes to wear, and shares his food with me.

“I have heard that if you ride in another’s chariot, you must share responsibility in their misfortunes; if you wear another’s clothes, you must resolve their worries; and if you eat another’s food, you must stay loyal to him unto death.

“How can I abandon morality and righteousness for self-interest?”

Han Xin also had a strong belief in following Heaven’s will in his loyalty to his monarch. Liu Bang, after becoming the Han emperor, once asked Han Xin, “If I were a general, how many troops do you think I would be capable of leading?”

Han Xin explained, “It is because your position is mandated by Heaven, and it is to command generals, rather than the troops.”

Nevertheless, Liu Bang became increasingly jealous of Han Xin for his ability and intelligence. After the states were unified, Liu seized Han Xin’s military command and gradually reduced his position.

In a tragic ending, Xiao He, the Han prime minister who originally recognized Han Xin’s talent and recommended him to Liu Bang, helped Liu’s wife, Empress Lu (呂后), to frame Han Xin for treason. They lured him to the palace to be executed, and killed all members of his clan as well.