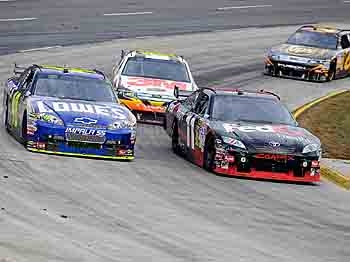 By James Fish
Print
An odd thing happened at Martinsville Speedway on Sunday: NASACR raced there and Jimmie Johnson did not win. Instead Denny Hamlin came back from an early-race pit lane collision to take the victory, making up for losing to Johnson at Martinsville in March.

Martinsville Speedway, site of the TUMS Fast Relief 500 on October 25, is a half-mile banked oval, an old school bull-ring where a certain amount of pushing and shoving is expected. Junior Johnson won in Martinsville in the Spring, nudging Denny Hamlin aside to cross the finish line first.

Hamlin, who finished poorly in the past two races, was not expected to be factor at Martinsville. Jimmie Johnson, who had won three of the five chase races, was expected to dominate.

Instead, it was Hamlin’s FedEx Toyota that had the best set-up late in the race. Hamlin led the most laps, and led the final 137 laps.

Hamlin collided with Dale Earnhardt Jr, in pit lane on lap 46, damaging the nose of the car slightly, but the damage only seemed to make him faster.

Hamlin took over the lead on lap 183. He fought off Kyle Busch, but lost the lead in the pits on lap 254. Then Hamlin worked his way back to the front, finally passing Jimmie Johnson to retake first place on lap on lap 363.

For the rest of the race Hamlin was untouchable, pulling away on the restarts and running ahead of the battles in the pack. At the last Martinsville race, Jimmie Johnson pushed Denny Hamlin aside to take the win. This time Hamlin didn’t let Johnson get close enough to try it again.

“I knew all those guys were going to be aggressive and try to get the win, but we just had the best car there at the end,” Hamlin said. “The #48 [Johnson] didn’t do anything that he shouldn’t have, he made sure he protected his points lead, and gave us a little bit of respect as well.”

Hamlin thanked his fans for sticking by him after he finished 37th and 42nd in the last two races. “I have to thank all my fans that’ve been sticking with me on Twitter, and everyone who’s been giving me some hop e that the last two weeks are in the past.”

Jimmie Johnson took his loss in stride. “Denny had the best car there, that last run—and maybe for the two runs before that he had the best car. At the end of the race that #11 car [Hamlin] was going to be there and it was going to be strong so congratulations for him. Great day for us. Wish we could have won, but second—there’s nothing wrong with that.”

There were battles aplenty back in the pack. Jeff Gordon, who led early in the race but dropped back when his two-tire pit strategy proved unwise, got beat up and battered by Juan Pablo Montoya, who seemed determined to push Gordon aside even though Montoya had the speed to pass cleanly. The pair fought for several laps, with Montoya finally muscling his was past. From there Montoya passed Jimmie Johnson cleanly for the lead, but Montoya could hold it. Montoya still managed a respectable third.

Joey Loganao and A.J. Allmendinger jousted for a few laps, with Allmendinger ending up in the wall. Such is NASCAR.

Dale Earhardt Jr. had an even worse day than usual. After getting rammed in the pits by Denny Hamlin, Junior had a series of tire failures which put him into the wall a couple of times. Apparently he was melting beads due to brake overheating. He eventually finished 29th. After announcing last week that he was at the end of his rope, it is hard to know where he goes from here.

The race saw fourteen cautions; fifteen actually, as the Green-White-Checkered finish turned into a Checkered/Yellow finish. Scott Speed spun and hit the wall hard on lap 495, bringing on the G/W/C. But on the restart, John Andretti bounced off the inside wall, coming to rest in the middle of the track, just short of the Start/Finish line.

The stewards decided to let them race, waving the yellow and checkered flags simultaneously as the pack weaved around Andretti to end the day.

The Chase is a three-way fight going into Talladega; only Martin and Gordon have a real chance to catch Johnson, and the way Johnson has been running, many think the Chase is already over. But Talladega is a wild card; absolutely anything can happen on this high-speed, high-banked restrictor-plate track. There is nowhere safe to run and nowhere to hide; the “Big One” can happen anywhere and at anytime, and anyone can get caught up in it.