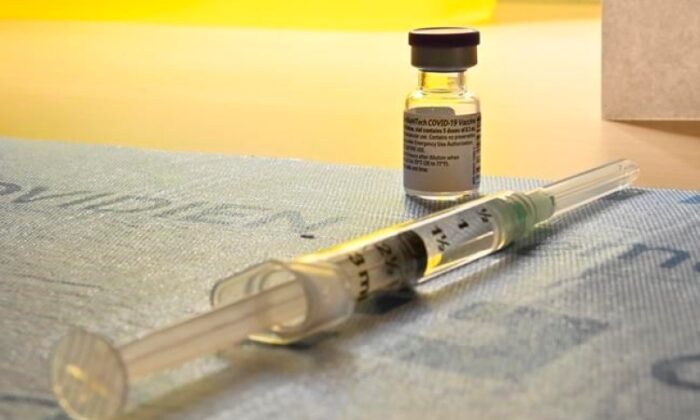 A syringe of the COVID-19 vaccine waits to be administered in Toronto on Dec. 14, 2020. (The Canadian Press/Frank Gunn)
Canada

The City of Hamilton, Ont., will proceed with its plan to fire unvaccinated municipal employees at the end of May despite calls from a city councillor to halt its COVID-19 vaccination policy.

In August 2021, Hamilton’s city council approved a mandatory COVID-19 vaccination verification policy, requiring all city employees to provide proof of vaccination by May 31, 2022.

Unvaccinated employees are subjected to a mandatory COVID-19 vaccination education course, with continued non-compliance resulting in “possible discipline,” according to an official document on the policy.

During a city council meeting on April 27, the council voted to keep the policy in place for the time being.

During the meeting, councillor Esther Pauls of Ward 7 called for halting the implementation of the policy, which will result in the potential termination of hundreds of city employees after May 31.

“The Reopening Ontario Act expired March 28. The policy is no longer relevant. Dr. Kieran Moore, Ontario chief medical officer, had actively encouraged the end of vaccination policy since March 1, citing they are no longer necessary. We as city council and city have followed the province for two years and a half and now we say let’s stop following their advice,” Pauls said.

“If we do not implement the vaccine policy verification, when will this vaccination policy stop? How many boosters or new vaccines will be mandated in an updated definition of ‘fully vaccinated?'”

Pauls, who said she is pro-vaccination, urged compassion for the unvaccinated population, saying that she has been receiving emails and calls from local residents who didn’t get the shots for various reasons, but are now about to lose their jobs.

“I know we will have a high cost to pay, but … not only because of the financial aspect, for a human aspect, let’s not divide the city,” she said.

“There’s very few in the City of Hamilton that decided not to [be vaccinated]. So let’s save their jobs, let them have a roof over their head.”

The City of Hamilton has said roughly 94 percent of its employees are fully vaccinated and in compliance with the policy, leaving about 500 people who could be terminated from their positions.

Pauls questioned the logic of those who blame the unvaccinated 6 percent, when the majority of the population has been vaccinated.

“Logic tells you if you have 100 balls in a box and all of them are red except six, then if you put your hand in there and pick up a ball, it’ll be red,” she said. “So logic tells you that it’s not the [six percent] that are spreading in the City of Hamilton.”

On April 28, a union representing public transit workers in Hamilton said it will fight the city council’s policy, reported CP24.

“It is irresponsible for this city council to cast a vote to terminate hard working employees, who have served on the front lines for the last two years during COVID-19, especially during times without any protection,” Amalgamated Transit Union Local 107, which represents workers of the Hamilton Street Railway, said in a statement on April 28.

“To come to this conclusion now is disrespectful and completely unfair to all frontline city and transit workers who continue to work and serve this community daily.”

The union said it will file a grievance over the policy, saying that the city’s decision could ultimately cost taxpayers “$500,000 for unnecessary litigation.”

“Those financial resources could have been better spent on upgrading air treatment equipment on our buses to better protect both workers and transit riders,” it said.