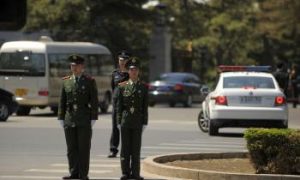 By James Fish
Print
Lewis Hamilton and Jenson Button earned McLaren the top two places in the Formula One Grand Prix of Turkey Sunday, after Sebastian Vettel wrecked trying to force past teammate Mark Webber, while the Red Bull drivers were running 1–2.

“It was quite an exciting race, actually,” Hamilton said on SPEED-TV. “We knew we had good race pace we knew we’d be able to at least stay with the Red Bulls. Unfortunately they were so fast through Turn Eight it was very difficult to be able to slipstream otherwise, everywhere else I was pretty much on his tail.

“We lost a little time in the pit stop and came out behind, so it was double trouble, trying to get past both of them. At the end, I’m not really sure what happened to these guys.

“A really great result for the team our second one-two.”

Hamilton dedicated the race to his father, whose 50th birthday is Monday.

Sebastian Vettel made a fantastic start, taking second from Lewis Hamilton, only to have Hamilton take the position back a few turns later. Then Hamilton chased Webber for several laps. The McLaren was much faster down the straights, but lost the advantage in the corners. Hamilton made a several attempts but couldn’t get past Webber. On lap 15, Webber and Hamilton pitted together. Hamilton’s crew had a bit of difficulty with the right rear wheel, and when Hamilton got back on track he was third behind Webber and Vettel.

For the next 25 laps, the two Red Bulls led the two McLarens, all four cars taking turns setting fast lap. Vettel slowly closed on Webber, with Hamilton and Button each a few tenths back. On top of the tension of wondering whether Hamilton would make a move on Vettel, was the impending threat of rain, as a dark cloud approached the track.

Lap forty saw an amazingly stupid maneuver by Sebastian Vettel. The young German, frustrated by a series if mechanical failures which had given Mark Webber more success and a more prominent position at Red Bull, lost patience and tried to force past his teammate to take the lead.

Vettel got inside Webber going into Turn 12, but couldn’t get past. Webber did not give his teammate any extra room; he held his line and kept his foot down. Vettel darted to the right, pushing his right front wheel into the side of Webber’s car, forcing both cars off the track.

Vettel’s car was ruined; Webber had to pit for repairs. Webber rejoined in third, 30 seconds behind the McLarens, too far back to have a chance at catching them.

Vettel’s antics cost the team its lead in the Constructor’s championship and cost the Vettel second in the Drivers’ championship.

After the race Mark Webber seemed frustrated, but not angry at Vettel’s error. (Perhaps he would have felt differently had he not been able to continue to take third.)

“Seb [Sebastian Vettel] had a big top-speed advantage,” Webber said. ”He went down the inside, we were side by side then it looked like he turned pretty quick to the right and then we made contact. It happened very fast. It was obviously a shame for the team. Not an ideal day.

“Obviously neither of us want to make contact with each other but it can happen sometimes.”

The drama was not over. On lap 49 Jenson Button (perhaps inspired by Vettel) pushed past Hamilton in Turn 12. The two ran side by side for a few turns, until Button squeezed past into the lead. Hamilton wasn’t having nay; he retook the lead coming down the straightaway to Turn 1.

“Me and Jenson had a good little battle,” Hamilton explained. “He got me on the outside into Turn 13, and then fortunately I was able to get him back into Turn 1. It was definitely unexpected but a really fair battle with him.”

Even then the drama wasn’t over. McLaren’s pits radioed to both drivers to conserve fuel, as they were in danger of running out.

The McLarens had plenty of room to relax; even after running the final laps in fuel-conservation mode, they finished 21 seconds ahead of Webber.

It was apparent that the McLaren and Red Bull cars were in a class of their own. Schumacher and Rosberg were half a minute off the pace of the leaders, with everyone else still further back. Robert Kubica was the best-placed Renault in sixth, and Felipe Massa the best-placed Ferrari in seventh.

Perhaps more telling was Fernando Alonso finishing eighth. After starting from 12th, Alonso managed to gain only four places. Alonso spent several laps trying to get around Vassily Petrov in the other Renault. Alonso had the edge in experience, but apparently not much of an edge with his car.

At the end of the race, McLaren held a one-point edge over Red Bull in the Constructors’ Championship, 172–171, with Ferrari at 146.

Mark Webber held on to first place in the Drivers’ Championship with 93 points, trailed by Button with 88, and Hamilton with 84. Vettel dropped to fifth behind Fernando Alonso.

It looks like the rest of the season will be a duel between McLaren and Red Bull. If Red Bull, with its edge in downforce, can get their “f-duct” working, they should have the edge. (The “f-duct” dumps air onto the leading edge of the rear wing on straightaways, stalling the wing and giving a significant increase in top speed.)

If not, McLaren has proved it can match the Red Bull’s pace. Given a track with a slightly longer straight or slightly faster corners, the McLaren might be too fast to catch.

Formula One returns to North America next for the Grand Prix du Canada, in Montreal, on Sunday, June 13. Visit the official Formula 1.com Tickets and Travel web page to make arrangements.