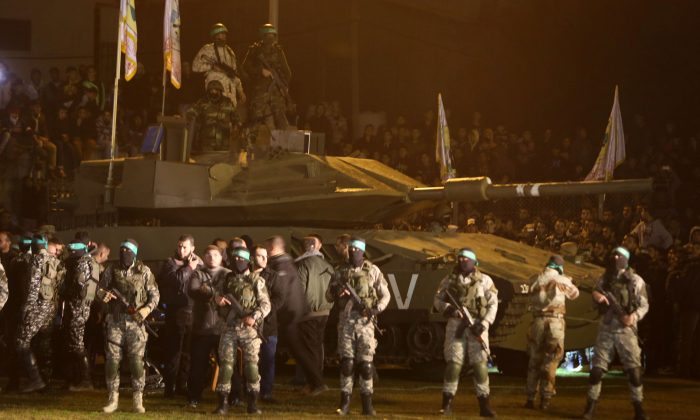 Palestinian members of the Ezzedine al-Qassam Brigades, the armed wing of the Hamas movement, gather around a mock Israeli tank on January 31, 2016 in Gaza city during a gathering to pay tribute to the brigade's militants who died after a tunnel collapsed in the Gaza Strip. (MAHMUD HAMS/AFP/Getty Images)
Middle East

Hamas recently released a picture that purportedly showed their soldiers standing in front of a tank they had assembled from captured Israeli parts.

A Hamas spokesperson called the reassembled vehicle a “powerful trump card,” according to the Turkish newspaper Yeni Akit.

Ofir Gendelman, the spokesperson for the officer of the Israeli Prime Minister, posted a picture that showed the tank was running on car wheels, not tank treads, and said it looked like it was made of wood.