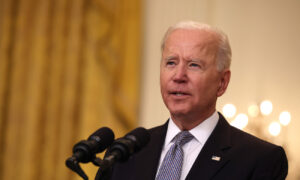 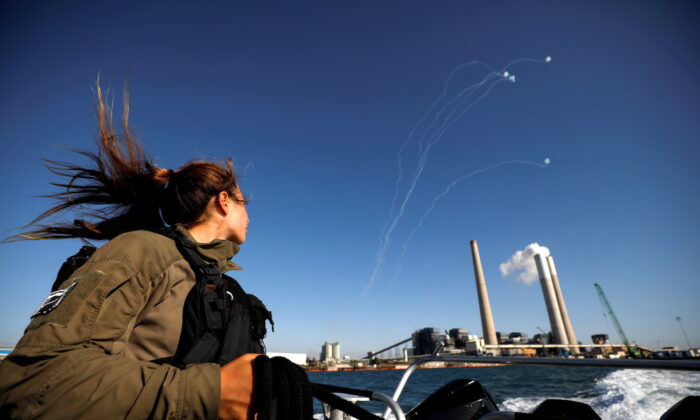 An Israeli soldier looks on as Israel's Iron Dome anti-missile system intercepts rockets launched from the Gaza Strip toward Israel, on May 19, 2021. (Amir Cohen/Reuters)
Middle East

A senior Hamas official predicted a ceasefire within days even as fighting continues, with Hamas and other terrorist groups firing more rockets from Gaza at Israel, which faced a second attack from Lebanon on Wednesday.

The Biden administration on the same day signaled to Israeli officials multiple times that it is pushing for deescalation on the path to a ceasefire in the region.

Deputy Hamas chief Moussa Abu Marzouk told Lebanon’s al-Mayadeen TV on Wednesday, “I think that the ongoing efforts regarding the ceasefire will succeed. I expect a ceasefire to be reached within a day or two, and the ceasefire will be on the basis of mutual agreement.”

Abu Marzouk’s comments on a potential ceasefire come after Israel was attacked by four rockets fired from Lebanon on Wednesday afternoon local time, triggering sirens in the country’s northern region. The Israel Defense Forces (IDF) announced that their Iron Dome missile defense system was able to intercept one of the rockets, while their artillery forces responded by striking “a number of targets” in Lebanon.

Of the other three rockets, one fell in an open area, and two fell in the sea, the IDF said. Israel’s national emergency service, Magen David Adom (MDA), said that two people were lightly injured while running to bomb shelters, reported The Jerusalem Post.

Those attacks marked the third time that rockets were fired at Israel from its northern neighbors in the past week. Previously, six rockets were fired from Lebanon on May 17, but most fell short of the border and landed inside Lebanese territory, the IDF said, adding that one of the rockets may have hit Israel.

On May 14, three rockets were fired at Israel from Syria, one of which fell inside Syria while the other two landed in open areas of the Golan Heights, the Israeli military said. The attack came as Israel had fired warning shots at some rioters from Lebanon who breached the border fence into Israeli territory, setting fire to the area.

Since the fighting began on May 10, authorities put the death toll to date at 12 in Israel, where repeated rocket attacks from Hamas and other terrorist groups have sent people rushing into shelters. The IDF said that Iron Dome was able to intercept about 90 percent of the rocket attacks from Gaza. Meanwhile, Palestinian health officials say 228 people have been killed.

Of the approximately 4,000 rockets that have been fired from the Gaza Strip toward Israel, about 600 have misfired and fallen inside Gaza, according to the IDF. Spokesperson for Israeli Prime Minister Benjamin Netanyahu, Ofir Gendelman, said that some of the misfired rockets potentially killed and injured Palestinians.

The IDF said it is continuing to make headway in destroying the terrorist group Hamas, announcing early on Thursday that its aircraft have struck Hamas aerial defense compounds as well as “a large number of Hamas multi-barrel rocket launchers.” The IDF added that its fighter jets have, over just five days, destroyed more than 60 miles of tunnels that Hamas terrorists were using to hide and transport artillery and weapons.

“With every passing day we are striking at more of the terrorist organizations’ capabilities, targeting more senior commanders, toppling more terrorist buildings and hitting more weaponry stockpiles,” Netanyahu said in a statement on Wednesday. “I especially appreciate the support of our friend, U.S. President Joe Biden, for Israel’s right to self-defense. I am determined to continue this operation until its objective is achieved: to restore the calm and security to you, citizens of Israel.”

Israel and Hamas have waged multiple conflicts since the terrorist group took control of Gaza in 2007. Israeli airstrikes in retaliation to rockets from Gaza are not rare.

The latest Hamas-Israel conflict came on May 10, during the Muslim fasting month of Ramadan, as well as a planned Jewish nationalist march in honor of the annual Jerusalem Day. That day, Hamas fired long-range rockets at Israel amid clashes between Palestinian rioters and Israeli police at the Masjid al-Aqsa Mosque—a compound revered by Jews as the Temple Mount and by Muslims as the Noble Sanctuary.

Due on the same day was a now-postponed Israeli Supreme Court hearing to evict several Palestinian families in Sheikh Jarrah, East Jerusalem, who were found to have not paid rent. According to reports, Israeli police had been clashing with Palestinian protesters and rioters weeks prior in the lead up to May 10.

The Biden administration, in multiple talks with Israeli officials on Wednesday, continued to push for a ceasefire.

Secretary of State Anthony Blinken told Israeli Foreign Minister Gabi Askenazi that the United States “expects to see deescalation on the path to a ceasefire,” according to a State Department readout. The two leaders discussed efforts to end the violence in the region, with Blinken saying that the United States would “remain engaged with Israel, the Palestinian Authority, and regional stakeholders in the days ahead.”

Blinken’s comments come after Biden told Netanyahu that he “expected a significant deescalation today on the path to a ceasefire.” It marked the fourth call since the start of the latest Israel-Hamas conflict. The two leaders also had a “detailed discussion on the state of events in Gaza, Israel’s progress in degrading the capabilities of Hamas and other terrorist elements, and ongoing diplomatic efforts by regional governments and the United States.”

Similarly, Secretary of Defense Lloyd Austin on Wednesday morning told Israeli Defense Minister Benny Gantz that he urged deescalation in the conflict. Austin still underscored his support for Israel’s right to defend itself, according to Pentagon Press Secretary John Kirby. “Certainly, the secretary expressed [to Gantz], again, our deep concerns over the loss of innocent lives. We don’t believe that violent conflict there is in anybody’s interest,” Kirby said.

The United States has so far blocked at least four attempts to issue a joint press statement from the 15-nation U.N. Security Council calling for a ceasefire and condemning Israel’s military response to being attacked—a stance backed by the Chinese Communist Party.

On Wednesday, the United States said that it also opposes a proposed U.N. resolution drafted by France calling for a ceasefire and humanitarian aid for Gaza. The resolution would only require nine “yes” votes and no veto by the United States or any of the four other permanent members on the council, compared to a press statement which would require all 15 council members to concur.