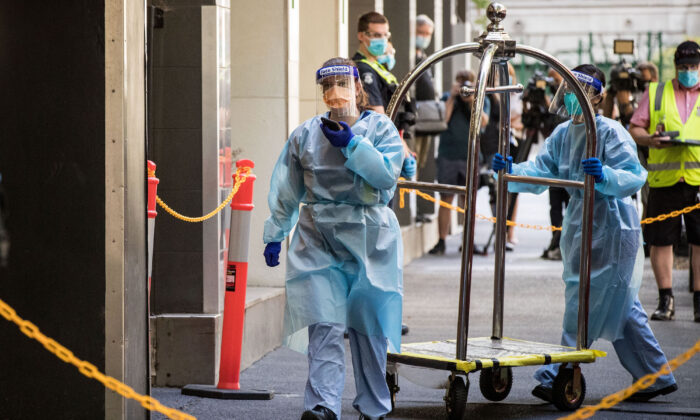 Other states could follow the decision made by New South Wales (NSW) to slash quarantine periods for double-dosed COVID-19 close contacts as vaccination rates increase.

NSW is halving the two-week quarantine period for close contacts who have had two doses of a vaccine as long as they return a negative test on day six.

University of Melbourne epidemiologist Tony Blakely has labelled the decision a sensible one.

“Once the vaccine coverage is getting up across the whole population and we are starting to live with the virus, these are the sorts of rule changes you would expect to happen,” he told ABC TV.

Prof. Blakely says vaccination coverage across different states and territories will dictate how quickly this approach is adopted elsewhere.

NSW has double-dosed 67 per cent of its population aged 16 and older.

He expects Victoria, which has a 52 per cent full vaccination rate, could follow the lead of NSW in time.

Meanwhile, Melbourne has taken the unenviable title of the world’s most locked-down city.

The state capital on Monday chalked up 246 days of stay-at-home orders.

This surpasses the record set by the Argentinian capital of Buenos Aires.

About 48 per cent of the sunshine state’s over-16 population is fully immunised.

This gives Queensland the country’s second-lowest vaccination rate next to Western Australia (WA).

“They have been very lucky to dodge bullets so far. But the virus will get in there at some point,” Blakely said.

“I hope they can keep it out until the 80 per cent vaccination coverage and jump over that phase.”

The National Rugby League grand final went ahead in Brisbane after Queensland reported no new infections on Sunday.

WA health authorities were monitoring an oil tanker that docked at Fremantle on Saturday after 12 crew members tested positive for COVID-19.

Four were in hospital in Perth, with the remaining crew isolating or quarantining on the vessel.

The federal government defended its decision to wind back financial support in line with vaccination rates of 70 and 80 per cent.

Finance Minister Simon Birmingham said some $20 billion has already been paid out and businesses needed to be able to reopen.

He also warned industries like hospitality and entertainment would not be able to snap back to normal at 80 per cent vaccination.