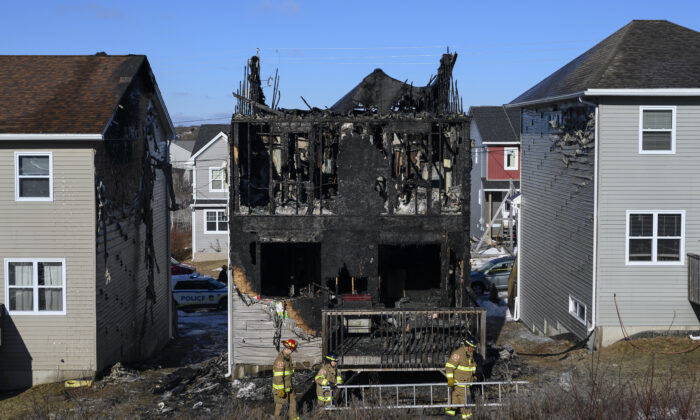 The parents of seven children who died in a Halifax house fire a year ago are offering thanks to the public for the love and support they've received since the tragedy in the Halifax suburb of Spryfield on Feb. 19, 2019. (Darren Calabrese/The Canadian Press)
Canada

HALIFAX—The parents of seven children who died in a Halifax house fire a year ago are offering thanks to the public for the love and support they’ve received since the tragedy.

Syrian refugees Ebraheim and Kawthar Barho survived the fire that destroyed their rental home in the Halifax suburb of Spryfield on Feb. 19, 2019.

“We would like to offer our deepest gratitude to the thousands of Nova Scotians who have shown us their love and support over this past year,” the couple said in a statement released on Feb. 18 through the office of Halifax MP Andy Fillmore. “The loss is immense, and we miss our children every day.”

The Barhos said they managed to find comfort in the kindness of strangers, the courage of first responders, and in the dedication of health−care professionals, as well as “the sense of belonging offered to us by this community.”

“We will keep each and every one of you in our hearts forever,” the letter states.

Ebraheim Barho remains in hospital after sustaining severe burns over much of his body.

In a recent interview with CTV, Dr. Jack Rasmussen, the lead physician in the burn unit at the Halifax Infirmary, said Barho had undergone nearly 15 surgeries over the past year along with hours of physiotherapy and speech therapy.

Meanwhile, investigators in Halifax have yet to identify a cause for the fire.

In an update given last September, investigators said they were only able to determine that the blaze began at the back of the house in the main-floor living room near a couch.

Nothing was found to lead them to believe the fire was suspicious, and they ruled out smoking materials, kitchen activities, and electrical faults as possible causes.

The fire hit the greater Halifax community hard and touched people across the country. More than 2,000 people attended the funeral service for the Barho children in Halifax.

The family, originally from the war-torn Syrian city of Raqqa, arrived in Canada as refugees in September 2017.

They first settled in rural Elmsdale, N.S., about 35 minutes north of Halifax, but eventually moved to Spryfield to take advantage of immigrant services, including English-language training.

The Hants East Assisting Refugees Team also released a statement on Tuesday noting the tragic loss of the seven children but adding that “in difficult times our memories bring comfort.”

“We would like to express our most heartfelt thanks to the many people and organizations who have offered their love and guidance over the last year as we supported Kawthar and Ebraheim,” the group said. “To the thousands of Canadians who were there for us during this devastating time, we are deeply grateful.”