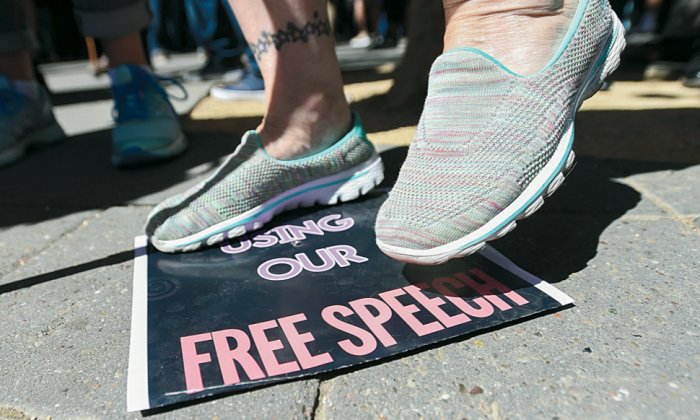 A woman stomps on a free speech sign at the University of California–Berkeley in Berkeley, Calif., on Sept. 24, 2017. (Josh Edelson/AFP/Getty Images)
UK

Half of UK Public Against ‘No-Platforming’ Controversial Speakers at Universities

Half of the public is against students “no-platforming” controversial speakers at British universities–but younger people are less likely to oppose the practice than older adults, a survey suggests.

More Britons think people are too easily offended (55 percent) rather than believing there is a need to talk more sensitively to those from different backgrounds (42 percent), according to a study into culture wars.

The poll, by King’s College London and Ipsos MORI, suggests that most (62 percent) Britons think political correctness has gone too far, but 16 to 24-year-olds are less likely to agree (38 percent) than those aged 55-plus (76 percent).

The report found that 50 percent of the UK public disagree that no-platforming is the right response to speakers with controversial views, compared with one in six (17 percent) who are in favour of such a response.

But less than a third of those aged 16 to 24 oppose the idea, compared with 60 percent of adults aged 55-plus.

Labour supporters (27 percent) are nearly three times as likely as their Conservative counterparts (10 percent) to agree that no-platforming can be appropriate, the report suggests.

The survey, of more than 2,800 adults aged 16-plus in the UK, found that 53 percent of the public think universities should expose students to all types of viewpoints, even if they are offensive to certain groups.

Despite the feeling that some people are too sensitive, most people say they would not feel reluctant to share their views on key culture war issues with colleagues or classmates–even ones that are potentially controversial, like Black Lives Matter or transgender rights.

The findings come after the Higher Education (Freedom of Speech) Bill was introduced in Parliament.

Among the government’s proposals is the appointment of a “free speech champion” who will investigate potential infringements of duties, such as no-platforming speakers or dismissal of academics.

Academics, students, or visiting speakers to English universities will be able to seek compensation through the courts if they suffer loss from a breach of the free speech duties under the Bill.

For the first time, students’ unions at universities would be required to take steps to secure lawful freedom of speech for members and visiting speakers.

But the research finds that suggestions of left-wing bias among university professors do not seem to have registered with the public.

Among people who attended university the most common view was that professors at their institution had a mix of political opinions (36 percent).

Professor Bobby Duffy, director of the policy institute at King’s College London, said: “Large proportions of the public start from the perspective that political correctness has gone too far, and that other people are too sensitive.

“Many have a clear view that ‘no-platforming’ is not the best response, and that young people should be exposed to controversial views.

“There are, however, very different perspectives on this depending on your age and political identities–our views of political correctness are one of the clearest dividing lines in ‘culture war’ issues.”

He added: “But we need to avoid concluding that this means we have a new generation of ‘snowflakes’ or a stifled national conversation: the young are always quite different from older people on these sorts of questions, and the large majority of the public still say they are happy to express their views on controversial issues with others.”

A Department for Education spokeswoman said: “We recognise that many share the values of free speech and academic freedom and know the chilling effect on campuses that can arise from censorship and no-platforming.

“That is why we have introduced our landmark Freedom of Speech bill on the issue, to strengthen and further enable the efforts of those who are working within higher education to ensure that these values are protected.”