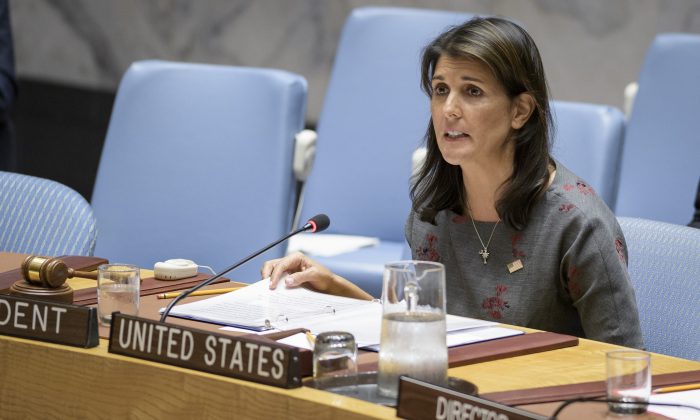 Haley Hints US Will Shake Up Funding for UN Peacekeeping

After lauding the U.N. Security Council for working together on North Korea sanctions, U.S. Ambassador to the U.N. Nikki Haley also leveled some criticism. The U.N.’s member countries have largely failed to live up to the ideals of multilateral cooperation, Haley said, and the United States will be rethinking its generous contribution to the international body in the coming months.

“The United States is by far the largest contributor to the United Nations budget. Our support for multilateralism at the United Nations has not been limited to rhetoric—it has been concrete, in both our words and our deeds,” she said at a Nov. 9 meeting of the U.N. Security Council.

Following those remarks, she said the United States will be making “an important decision on how we distribute the costs of peacekeeping.”

She pointed to a resolution put forward by Cuba condemning the U.S. embargo, which has been in place since the island nation fell to communism in 1959. The United States tried to amend the resolution to include its support for the rights of the Cuban people.

“Multilateralism fails when it fails to support the goals of peace, security, and human rights,” Haley said on Nov. 9. “When the General Assembly gives the barbaric Cuban regime a pass for violating the rights of the Cuban people just to poke the United States in the eye, that is a failure of multilateralism.”

This isn’t the first time she has called for funding cuts or taken drastic measures to prove that the United States is serious about human rights.

In June, the United States pulled out of the Human Rights Council after trying to reform it, saying that with countries like China, Cuba, and Venezuela as members, it was a “hypocritical and self-serving organization,” as Haley called it.
In another case, the United States cut funding for a program that supported Palestinian refugees after it tried but failed to amend an annual report on the program to include the responsibility of Hamas for the suffering of those living in Gaza. It also called the program “unsustainable,” due to the ever-growing list of beneficiaries whose burden, the United States felt, was not being shared equitably.
The United States pays 25 percent of the roughly $6.7 billion budget for U.N. peacekeeping.
Haley, who announced her resignation from her post last month, has pushed back against requests for the United States to share more of the peacekeeping burden, and has instead urged other nations to “support more equitable burden sharing.”
U.N. funding is worked out through a formula as set out in an article of the United Nations Charter. It’s not clear yet how the United States might change this formula, or whether it is merely seeking higher contributions from other nations.
Follow Holly on Twitter: @HollyGailK
TOP NEWS