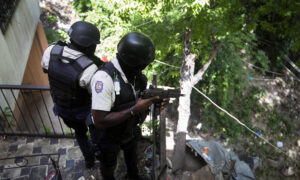 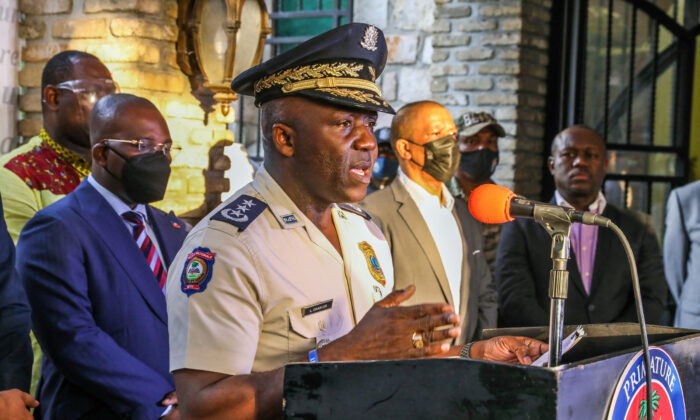 A Haitian-born doctor based in Florida, who is believed to be a “central” suspect in the assassination of Haitian President Jovenel Moïse, was arrested on July 11.

Moïse was killed early on July 7 during an overnight attack at his home in Port-au-Prince.

National Police Chief Léon Charles announced the arrest of Christian Emmanuel Sanon, a 63-year-old doctor, during a press briefing on July 11. Sanon is the third Haitian-born individual with reported ties to the United States to be arrested.

Moïse was shot dead by what Haitian authorities have described as a unit of assassins formed of 26 Colombians and two Haitian Americans. The president’s wife, Martine, was also wounded in the attack, and was taken to Miami for treatment.

The killing of Haiti’s president comes amid growing chaos in a country already enduring gang violence and political instability.

“He arrived by private plane in June with political objectives and contacted a private security firm to recruit the people who committed this act,” Charles told reporters, noting that the firm was a U.S.-based Venezuelan security company called CTU.

“The initial mission that was given to these assailants was to protect the individual named Emmanuel Sanon, but afterward the mission changed,” the police chief added.

A three-minute YouTube video dated Aug. 18, 2011, with the description “Dr. Christian Sanon—Leadership for Haiti,” appears to paint the doctor as Haiti’s potential leader. In the clip, the speaker, which appears to be Sanon himself, describes Haiti’s leaders as “corrupt.”

“We need a new leadership that will change the way of life.”

Charles told reporters that Sanon wanted to take over as president, but didn’t elaborate beyond saying his motives were political, Reuters reported. He added that one of those in custody had contacted him upon being arrested.

Sanon, in turn, contacted two other “intellectual authors” of the assassination, Charles said.

“The mission of these attackers was initially to ensure the safety of Emmanuel Sanon, but later, the mission was changed … and they presented one of the attackers with an arrest warrant for the president of the republic,” Charles said.

Haitian police have arrested 18 Colombians and three Haitian Americans, including Sanon, over the murder, Charles said. Five Colombians are still at large and three were killed, he added.

The Miami Herald reported that the detained Colombians said they were hired to work in Haiti by Miami-based company CTU Security, run by Venezuelan emigre Antonio Enmanuel Intriago Valera.

Charles indicated that CTU had been used to hire at least some of the Colombian suspects, but gave no details.

The Herald also reported that four members of Moïse’s security detail have been removed from their posts. They’ve been asked to report daily to internal affairs, and were requested for questioning.

Moïse was shot 12 times in the upstairs bedroom of his home at around 1 a.m. on July 7. His wife, who was also seriously injured in the attack, has claimed that he was shot dead “in one blink of an eye.”

“They riddled my husband with bullets without even giving him a chance to say a word,” she said in an audio message in her first account of the ordeal, accusing the suspected assassins of murdering her husband in order to gain control of Haiti “so that there is no transition.”

“We can’t let the country go astray,” she said.

Unrest in Haiti has intensified in recent months. Moïse, who was elected by a narrow margin in 2016, only took office in 2017, due to unrest. Opponents argued that his term legally ended in February, but he refused to leave office, saying that his term should end later because he was delayed in assuming office.

Before his death, Moïse was pushing for a referendum to overhaul Haiti’s constitution, with proposals that included restructuring the government.

He said the revisions were to streamline the country’s divided government by removing the position of prime minister, and replacing it with a vice president who answers to the president. It would also eliminate the Senate, replacing it with a single legislative body elected every five years.

Although Moïse’s approach had received backlash, many Haitians say a new constitution is needed.

“We need a system that works,” Moïse had told The New York Times in a telephone interview in March. “The system now doesn’t work. The president cannot work to deliver.”

“The 1987 Constitution enshrined many gains, but has had its day,” he said in a Twitter post in March. “We must have the courage to adopt another which, through futuristic arrangements, will lead Haiti to a more balanced political regime less likely to cause instability.”