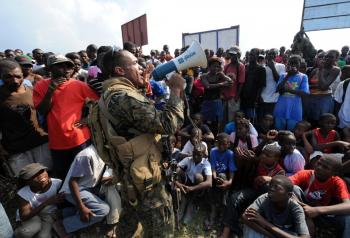 Haitian earthquake victims listen to a U.S. Marine in Leogan on Jan. 20. The logistics of transporting needed supplies is an ongoing dilemma in Haiti which was hit by a 6.1 magnitude aftershock early Wednesday morning. (Jewel Samad/AFP/Getty Images)
International

Cheryl Casati
View profile
Follow
biggersmaller
Print
Haiti was struck by another heavy 5.9 aftershock on Wednesday (originally estimated at 6.1 and later revised), further putting the already devastated country in ruins. The latest quake was centered about 35 miles west-southwest of the Haitian capital Port-au-Prince.

Moments after the latest quake people were reportedly fleeing to the streets and jumping from buildings in sheer panic. Other people in the capital had already been sleeping in the streets out of fear of being hit by collapsing buildings.

"It kind of felt like standing on a board on top of a ball," said Steven Payne, a U.S. Army staff sergeant describing the aftershock, reported AP.

Jose Ruiz, a spokesperson for the U.S Military Southern Command, said that the command office received word from Lt. Gen. Ken Keen on the ground that, "the aftershock shook them up a bit, but didn't affect their mission in Haiti."

There are 11,000 U.S. military personnel currently in Haiti, according to the U.S. Southern Command.

Ari Gaitanis, spokesperson for the United Nations secretary general, talked about the other side of the disaster. He said the word he’s heard most often to describe Haitians is “resilient.”

"They are coming around from this disaster. Keep in mind this is a country which has suffered a lot these last few years. It had made good progress before this huge blow," said Gaitanis.

Gaitanis said that the media reports of looting and chaos are painting a misleading picture.

"There have been little pockets of violence, anger, but that is normal in this situation. Overall, people aren't running around looting. Looting is occurring in only a small number of events. Some of the news reporting of overall chaos is not accurate—quite the opposite—there is more cooperation."

The Haitian government is still in charge of the overall situation in the country, according to Gaitanis, with the U.N. playing a key role in supporting local authorities.

“The U.N. is coordinating all the humanitarian organizations and efforts. The coordination is getting better day-by-day," said Gaitanis.

Gaitanis called the world’s reaction to the disaster “very heartening on a personal level,” from the monies being donated to people inquiring about adopting orphaned children.

Ann Campbell is an expert in transportation logistics at the University of Iowa’s Tippie College of Business. She says disaster planning is different from her usual work with businesses looking for how to do more with less.

"Usually I deal with companies who want the most cost effective way to transport their goods, disasters are different. It is about people getting there fast and fairly. Fairly in that you cover all areas, not just those easily accessible," said Campbell.

Since the 2004 tsunami in Southeast Asia and Hurricane Katrina in 2005, Campbell has been studying ways to find more efficient methods for governments, agencies, and businesses to transport relief supplies to disaster areas.

"The big lesson was better pre-planning, prioritizing supplies, minimize duplication of effort—think ahead, in areas where there are more likely to be disasters, set up storage areas stocked with supplies that are key items as a regular precaution," explained Campbell.

While most of the stories have been about the human toll, some groups are also concerned about the plight of hurt and homeless animals. The Animal Relief Coalition for Haiti (ARCH), a collaborative effort of national and international animal welfare organizations, is awaiting approval to send teams in to provide care and food for the animals, as well as give rabies vaccinations and organize evacuation if necessary.

With additional reporting by Peter Valk and Cindy Chan.