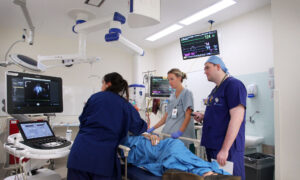 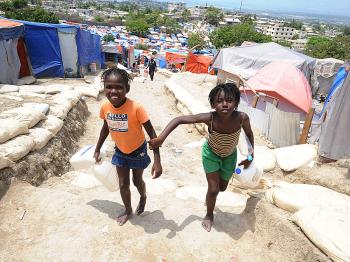 TENT LIFE: Young Haitian girls carry jugs for water at a tent camp near the capital of Port-au-Prince on April 17. Some 230,000 people were killed in the disaster and 1.3 million left homeless. Most now live in makeshift camps, which New York Haitian Consul General Felix Augustin, describes as 'not habitable.' (Thony Belizaire/AFP/Getty Images)
International

Out of the Rubble Something Good Can Come

By Cindy Drukier
Print
NEW YORK—The moment he heard that a catastrophic earthquake had reduced his hometown to rubble, Haitian-born music producer Mike Jean says his heart stopped—he knew the situation in Haiti was desperate.

Stunned by the images of Port-au-Prince on TV, he urgently tried to get a hold of his parents in Carrefour, a town just outside of the capital and at the epicenter of the quake—his spirits sank as nobody picked up the ringing phone.

Finally, some days later, a close friend called with news from the center of the apocalypse. The friend’s entire family was gone—mother, father, brother, and sister. Carrefour was in chaos, so many dead, many still dying, and everything in ruins with no aid in sight. His friend had no specific information about Mike’s parents, but both assumed the worst because they lived only a block away from his friend’s shattered home.

Mike was in shock. For the next two weeks, his eyes were moist with tears. But devastated as Haiti was, he also saw a spark of hope. He realized that this could be his country’s chance, her best opportunity for a better future. “We can’t cry for yesterday, we need to think about now and the future,” Mike said.

Already a dedicated humanitarian, Mike saw his life and his success as leading to this moment. “My dream, what I see here and I have been given, is the opportunity to be who I am.”

He has taken it on as a mission to help something good emerge from the rubble.

Mike Jean-Baptiste, a.k.a. Mikey Mike, was born in Carrefour, a city of 400,000 (before the quake), just 10 miles southwest of the capital of Port-au-Prince. By his late teens, Mike had already established himself as a music producer in Haiti, thriving at the heart of the international music scene.

In 1999 he left home, as the cliché goes, to seek his fortunes in America—and found them. By 2001, the 23-year-old was CEO of his own record label, Moonlight Entertainment.

In step with building his music career, Mike has also applied himself to humanitarian work. Over the past decade he has helped raise money for the One Heart Foundation, UNICEF, and Give Them A Hand Foundation; he worked with Haitian-born supermodel Tyrone Edmond on a calendar to raise funds for 9/11 relief; and he produced and hosted a charity art show with Slade Morrison, daughter of Nobel Prize and Pulitzer Prize-winning author Toni Morrison.

In his PR shots and event photos, Mike looks every bit the rock ‘n roll star. Half hidden behind dark sunglasses and often surrounded by women, he seems super cool and somewhat inaccessible. In person, his tone is confident, but humble, and his caring eyes bespeak a faith in humanity’s goodness.

With his mind still reeling from the earthquake, Mike set up the Haiti Disaster Foundation (HDF) with old friends and collaborators Carlo Pierre and Joseph Theus. On Feb. 5, in partnership with Andy Hilfiger, brother of fashion designer Tommy Hilfiger, they held a benefit concert in New York City to raise money for American Red Cross efforts in Haiti. Tommy was there and daughter Ally co-hosted the modest—compared to the scale Mike is thinking about now—but successful event.

The concert had been quickly put together, just a few weeks after the quake. Now Mike says he is somewhat disillusioned with big charities like the Red Cross whose reach seems so minimal while the suffering is so vast, with too much being spent on overhead.

There is devastation everywhere, “every place, every block,” says Mike trying to convey something of the scale of the destruction. “Some places don’t even know there is a Red Cross.”

Mike has big plans for HDF. He is currently working on a large-scale benefit concert, hoping to raise $5million-$6 million this time. He’s aiming for July at Carnegie Hall. Some money will go to the Red Cross or other organizations he has worked with, but the main goal is to spend the money directly, where he and the other Haitians involved know it will do the most good.

“I want to build up Haiti, this is massive restoration,” Mike said. “It’s my responsibility.”

Before the Jan. 12 earthquake, Haiti was already the poorest country in the hemisphere, with more than half the population subsisting on less than $1 per day, according to the United Nations.

The greatest contributing factor to the extreme poverty, many argue, is deep, stifling corruption. Corruption is so bad that many Haitian Americans did not want to send money after the earthquake fearing the funds would be siphoned off by corrupt officials, which, according to reports, has been happening.

According to a report on Australia’s ABC on March 17, National Assembly Deputy Steven Benoit said gangs in cahoots with corrupt officials were intercepting convoys of aid then selling it on the black market.

"These are people actually from the government who have their little gangs, but it's been like that for 200 years in Haiti. … Those gangs are operating with immunity because they know they are covered by highly ranking officials," he told ABC.

Mike’s partner in HDF and fellow Haitian, Carlo Pierre, returned from Haiti last week. According to Mike, Carlo reported that “in terms of the state of things there, it’s like the earthquake just happened.”

What we see on the news, and the reports we get from aid agencies, are about the places receiving aid, but there are still pockets of disaster where no help has come.

“Haiti is a very rugged country, mountain after mountain, and a lot people are living there. It’s not easy for aid organizations to reach some of those places,” says Felix Augustin, Haiti’s consul general in New York, who is supporting Mike and the HDF events.

Even in Port-au-Prince, Mr. Augusin says, “We are still in the phase of trying to clean up, it’s a very tedious process.” He says Haiti still needs heavy machinery to do this, at least 1,000 trucks, and people who know how to operate them. But the number one priority, he says, is getting people out of the tents. “They are not habitable.”

While the challenges are massive, Mike is full of optimism. “We can make it happen, it’s not a miracle.”

Perhaps his optimism comes from personal experience. About a week after the earthquake, Mike got a phone call from the same friend in Carrefour with unexpected news: Mike’s parents were alive. They were two of the lucky ones.

Today they too live in a tent behind their house. The house still stands, but it is not safe for living. Mike has tried to convince his parents to come to the United States, but they refuse to leave, insisting they need to stay and help. And really, what could Mike say?