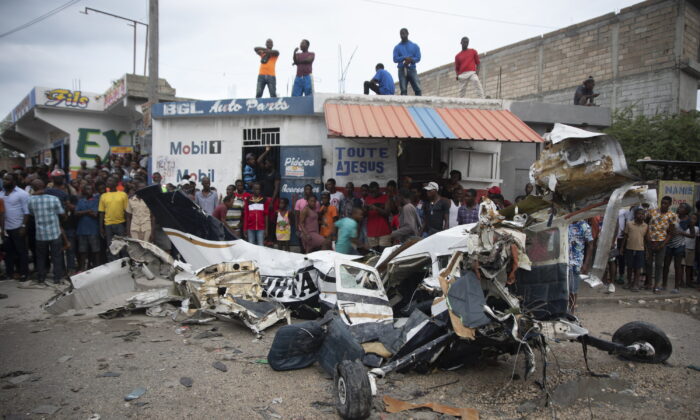 The wreckage of a plane that crashed in the community of Carrefour, Port-au-Prince, Haiti, on April 20, 2022. (Odelyn Joseph/AP Photo)
Americas

SAN JUAN, Puerto Rico—Haiti’s National Civil Aviation Office announced Thursday that it is banning all private aircraft from flying during an investigation into the crash of a small plane that killed at least five people and injured several others.

Authorities did not say when private flights could resume, adding that the measure is part of a review of private operators.

The announcement was made a day after a Cessna 207 crashed into a truck transporting sodas in the crowded capital of Port-au-Prince. A police official told The Associated Press that five people died upon impact, including the truck driver.

“I heard a big boom,” said Jean Felix Surin, a farmer who rushed out of his house to the scene of the crash. “Everybody was in shock.”

Someone in the crowd said one of the victims asked for help while still on the ground but died shortly afterward. Hours later, firefighters used hoses to clean the site.

Paule Robitaille, a Canadian politician, said on Twitter that one of the victims was Gamaniel Valcin and called on Canada’s government to help repatriate his body.

The Haitian newspaper Le Nouvelliste reported that the pilot died after being taken to a hospital.

The pilot was identified as Amado Gutiérrez from the Dominican Republic and carried a badge belonging to a Dominican flight school called Enalas. A secretary at the school said no one was immediately available for comment.

Officials said the plane was en route to the southern coastal city of Jacmel and crashed shortly after taking off from Port-au-Prince.

The crash comes four months after Haiti’s Civil Aviation Security Department issued a notice warning that several private operators it did not identify had been breaking rules by running commercial flights, among other things, without the required license.

Some people in recent months have opted to fly from the capital to Haiti’s southern region to avoid driving through gang-controlled areas that have seen a spike in kidnappings and killings.

By Dánica Coto and Evens Sanon