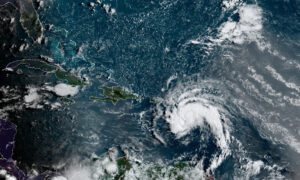 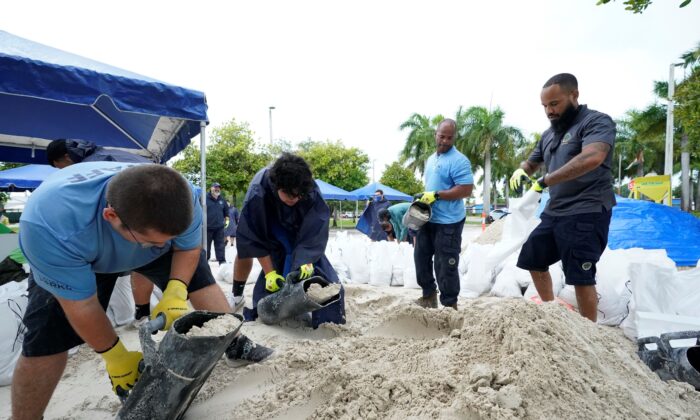 City workers fill sandbags at a drive-thru sandbag distribution event for residents ahead of the arrival of rains associated with tropical depression Fred, at Grapeland Park in Miami, Fla., on Aug. 13, 2021. (Wilfredo Lee/AP Photo)
US

Haiti Braces for Grace, Florida for Fred as Storms Brew

FORT LAUDERDALE, Fla.—Tropical Depression Grace drenched earthquake-damaged Haiti on Monday, threatening to dump up to 15 inches of rain on a landscape where people are huddling in fields and searching for survivors of a magnitude 7.2 earthquake. Tropical Storm Fred was strengthening off the northwest Florida coast, where forecasters said it could make landfall by Monday evening.

The U.S. National Hurricane Center said Fred’s main threats are rainfall—anywhere from 4 to 8 inches for Florida’s Big Bend and Panhandle—and storm surge. High water between 3 to 5 feet could enter the area between Indian Pass and the Steinhatchee River, depending on the tide at the time of Fred’s arrival.

Grace, meanwhile, was moving over Hispaniola Monday after dropping rain on Puerto Rico. With up to 10 inches of steady rainfall and more in isolated areas, flash floods and mudslides were possible in Haiti and the Dominican Republic.

Haitians along the southern peninsula, which is bearing the brunt of the weather, have been struggling to deal with the effects of Saturday’s 7.2 magnitude earthquake, already blamed for nearly 1,300 deaths.

Grace was centered 160 miles east-southeast of Port-au-Prince, Haiti, and moving west at 15 mph. Top winds were forecast to remain around 35 mph until it approaches Jamaica on Tuesday.

Meanwhile, the season’s eighth tropical depression formed late Sunday near Bermuda, and the hurricane center predicted it would become a tropical storm sometime Monday as it circles around the island, about 120 miles offshore. A tropical storm watch was in effect for the island as the system’s top winds grew to around 35 mph.

Along Panama City Beach in Florida’s Panhandle, lifeguards have hoisted double-red flags, warning beachgoers against going into the Gulf of Mexico. The area braced for rain and some wind from the storm, and while no evacuations were ordered, schools and government offices were closed on Monday.

On the Alabama coast, the city of Orange Beach offered sand and bags to residents worried about flooding. A half-dozen school systems shut down Monday in southeast Alabama, where as much as 6 inches of rain was possible, and a large church opened as a shelter.

“We’ve certainly been in a lot worse than this, but that’s no reason to be complacent,” said Florida’s Bay County Sheriff Tommy Ford. “The fewer people out on the road, the better. We do expect some heavy rain from this storm.”

By Terry Spencer and Andrea Rodríguez