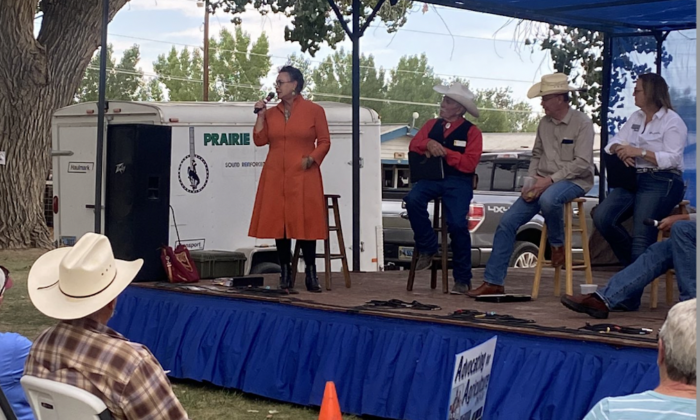 Wyoming Republican congressional candidate Harriet Hageman on Aug. 5 addresses voters in Basin, a town of less than 1,300 in Big Horn County, as part of her near-40,000 mile campaign to unseat three-term Rep. Liz Cheney (R-Wyo.) in their Aug. 16 GOP primary. (Courtesy of Hageman For Wyoming)
2022 Midterm Elections

Hageman-Cheney Costliest Congressional Race in Wyoming History, but Money May Not Matter

CASPER, Wyo.—More than $20 million has been collectively raised by the five candidates in Wyoming’s Aug. 16 Republican congressional primary, making it the most expensive U.S. House race in state history.

More than $15 million has been raised by just one of the hopefuls, embattled incumbent Rep. Liz Cheney (R-Wyo.) Much of the money came from out-of-state sources, including $1.2 million from Californians and Democratic organizations.

But ultimately, those dollars may have little influence on changing Wyoming voters’ minds.

Despite the massive fundraising advantage, by all indications, Cheney is projected to lose her bid for a fourth term as Wyoming’s lone congressional representative to Harriet Hageman, a land-use and water-rights attorney from Fort Laramie who is backed by former President Donald Trump.

A June 15 survey found Hageman leading by more than 22 points over Cheney, who has incurred the wrath of Wyoming GOP officials, who censored and ousted from the state party. She was one of the 10 House Republicans who voted to impeach Trump and serves as co-chair of the House committee investigating the Jan. 6 Capitol breach.

Hageman has a hefty war chest herself, reporting more than $4.3 million in donations on July 27 campaign financial statements filed with the Federal Elections Commission (FEC).

In that filing, Hageman’s campaign documents that it had $1.4 million in cash in mid-July.

That is a fraction of the $7.4 million cash on hand that Cheney’s campaign reported on July 27.

Hageman has raised most of her funding from individual Wyoming residents and state-based organizations and has reiterated that statistic with gusto. The campaign cited an OpenSecrets.org analysis that found 96 percent of the $7.2 million Cheney had raised by then was from out-of-state donors. That pattern continues, Hageman’s campaign says.

Hageman’s July 27 FEC filing shows she received a combined $188,850 from 150 in-state individual donors between April 1 and June 30, more than 43 percent of her second quarter contributions. According to her campaign, Hageman “raised $7 from Wyoming residents for every $1 Cheney took in.”

“Liz Cheney has turned her back on us to pursue her own personal war with President Trump, and we are fed up with having no one to stand up for us in the House of Representatives against the disastrous policies of the Biden administration,” Hageman said in July. “When I am the next congresswoman from Wyoming, I will always defend our values and remember who hired me for the job.”

The top group contributing to Hageman’s campaign is the Wyoming Values Political Action Committee (PAC), which has received $500,000 from Trump’s Save America PAC and spent more than $800,000 supporting her.

According to her July 27 FEC report, among out-of-state individual donations Hageman has collected is $5,000, the maximum amount allowable, from Trump’s Save America PAC. She also received $5,000 from the Madison Project PAC, operated by former Rep. Jim Ryun (R-Kansas), and $1,000 from America Matters PAC, managed by conservative Southern California political activist Joy Miedecke.

Among out-of-state donations is more than $100,000 from the 80,000 followers nationwide of Florida attorney/blogger Jeff Childers’ Coffee & Covid blog. Hageman thanked them for their support in a July video.

Blackstone Group, which has contributed $23,450 to Cheney’s campaign, has donated more than $20 million of the $25 million it has raised to GOP candidates.

Wyomingites Defending Freedom and Democracy has raised nearly $200,000 in support of Cheney and is directing much of that money into inducing the state’s 78,000 registered Democrats and unaffiliated voters to “cross-over” in the open primary and vote for the incumbent in the GOP race.

Conservatives for a Strong America has spent $47,108 attacking Hageman as a false conservative, implying she is secretly in league with Cheney, and directing voters to the three other candidates in the race.

Among notable out-of-state Democratic donors contributing to Cheney: film producer Jeffrey Katzenberg and his wife, who have chipped in more than $43,000 to Cheney and PACs supporting her; LinkedIn co-founder Reid Hoffman; and billionaire hedge fund manager Seth Klarman.

Since announcing her campaign to unseat Cheney in September, Hageman has crisscrossed Wyoming, logging nearly 40,000 miles in meeting and greeting voters in all 23 of the state’s counties.

Cheney, meanwhile, until late July, had been in Washington, D.C., engaged in the January 6 investigation into the Capitol breach, and what campaigning she had done in the state has mostly been private, low-key affairs before small groups of invited supporters.