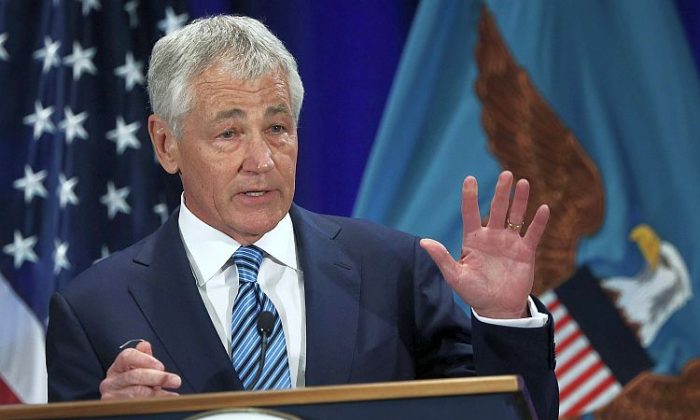 Secretary of Defense Chuck Hagel at the National Defense University in Washington on April 3, 2013. ( Alex Wong/Getty Images)
US

The announcement comes as national security concerns intensify over North Korea, the Pentagon deciding to delay an intercontinental ballistic missile test planned for this week fearing it could further inflame the rogue nation.

Hagel announced the reforms in a speech at the National Defense University April 3, his first major policy speech as defense secretary.

There were big “big choices” for his department to make in spending, he said, and signaled that all areas—acquisition, personnel, and organization—would be up for review.

“We need to challenge all past assumptions, and we need to put everything on the table,” he said.

Hagel has directed Deputy Secretary Ash Carter and Gen. Martin Dempsey, head of the Joint Chiefs of Staff, to lead a review of the department’s operations. The ‘Strategic Choices and Management Review,’ will not only identify risks and opportunities, but also prioritize changes to the greatest effect.

The exercise is not only “about matching missions with resources, looking at ends, ways, and means,” it is also about fundamental change, according to Hagel.

He described it as “change that involves not just tweaking or chipping away at existing structures and practices but, where necessary, fashioning entirely new ones that are better suited to 21st century realities and challenges.”

Under the across-the-board cuts known as sequestration, defense must reduce spending by $487 billion over the next decade.

Recent budget negotiations between Congress and President Obama gained the department some flexibility in the way those cuts were implemented, reducing the amount to be cut this fiscal year from $46 billion to $41 billion. The cuts remain harsh, with as many as 700,000 of the department’s civilian workers forced to take furloughs in the coming months to save about $2.5 billion.

Hagel said sequestration was an immediate concern reducing morale and eroding readiness, but the biggest long-term challenge was the ever-growing, internal demand for funds.

“Left unchecked, spiraling costs to sustain existing structures and institutions, provide benefits to personnel, and develop replacements for aging weapons platforms will eventually crowd out spending on procurement, operations, and readiness—the budget categories that enable the military to be and stay prepared,” he said.

The reforms would occur against a backdrop of security challenges including violent extremism; the proliferation of dangerous weapons and materials, regional tensions, plus newer risks posed by technology and cyber-attacks.

The DOD will be preparing for the future, he said, but “not in a way that neglects, or is oblivious to, the realities of the present.”

Right now that reality includes North Korea, which has ramped up its rhetoric and aggressive posturing to new and dangerous levels.

Following a long-range rocket launch in December and a nuclear test in February, the North Korean military warned last week that it had been authorized to attack the United States using “smaller, lighter, and diversified” nuclear weapons.

North Korean authorities advised foreign diplomats to leave the capital Pyongyang April 5, saying their safety could not be guaranteed in the event of armed conflict.

South Korean officials reported Saturday that North Korea has moved at least one missile with “considerable range” to its east coast. Workers have also been ordered to leave the Kaesong Industrial Complex, a jointly run North South operation across the border in North territory.

In an effort to reduce tension, the DOD delayed testing a Minuteman 3, a globe-circling intercontinental ballistic missile, due at Vandenberg Air Force Base in California this week, according to The Associated Press.

In response to a question at the defense university, Hagel said everything was being done to “defuse that situation on the peninsula.”

“I hope the North will ratchet this very dangerous rhetoric down,” he said. There is a pathway to peace for North Korea he added, but only if Pyongyang agrees to be “a responsible member of the world community.”