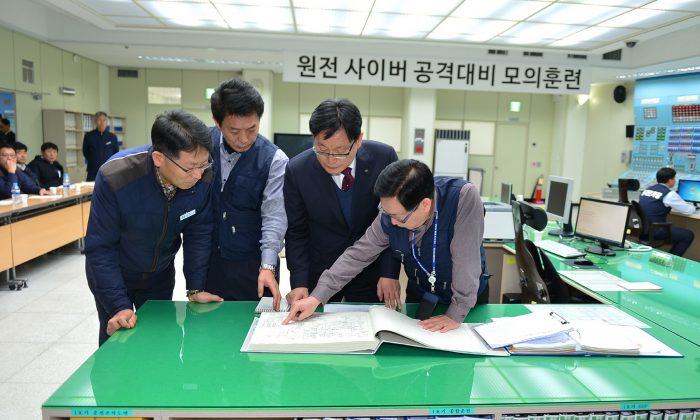 The unidentified hacker group posted partial blueprints and manuals for multiple South Korean nuclear plants on a Twitter account in December. The breaches were tracked to Chinese IP addresses, raising the possibility of a North Korean connection.

As China is North Korea’s only major ally, it is possible hackers from the impoverished Stalinist dictatorship, looking to improve its nuclear program, conducted the leaks.

Earlier this month CNN reported that North Korea’s Bureau 121, a secret military cyberwarfare unit, operates from the city of Shenyang in Northeast China with the sanctioning of the Chinese regime.

Investigators from the Seoul Central District Prosecutor’s Office said that last September and August, the hackers infected the computers of KHNP officials and their subcontractors via emails containing malware, according to the KHNP.

KHNP stated in December that its computers had been hacked, but would neither rule out nor deny North Korean involvement.

In April 2013, the North Korean regime said it was reactivating its plutonium breeder reactor at Yongbyon to pursue a nuclear deterrent.

North Korea has been developing nuclear capability for decades, yet its technology still lags significantly behind its southern rival. This makes South Korea a likely target for Northern espionage efforts.

Breaches were tracked to Chinese IP addresses, raising the possibility of a North Korean connection.

The other possible culprit is the People’s Liberation Army, which operates a veritable army of cyberoperatives and is behind much of the world’s industrial espionage, as previously reported by Epoch Times.

According to a report by Daily News Hungary, a representative from the state-owned China National Nuclear Corporation told Russian news agency TASS that the firm was looking not just to satisfy domestic energy demand but to export to countries in Eastern Europe, particularly Hungary, Romania, and Ukraine.

South Korea relies on 23 nuclear power stations for about a third of its electricity. Several more plants are under construction.

The hackers themselves claimed they were anti-nuclear power activists based in Hawaii, despite the location of their IP addresses.