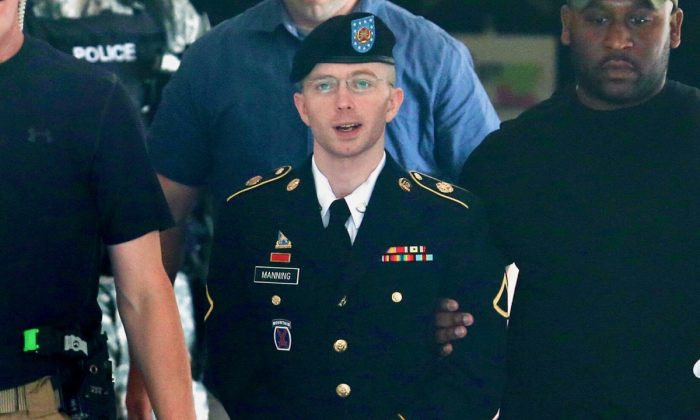 U.S. Army Private First Class Bradley/Chelsea Manning is escorted by military police as he leaves his military trial after he was found guilty of 20 out of 21 charges on July 30, 2013, in Fort George G. Meade, Maryland. (Mark Wilson/Getty Images)
US News

Hacker Adrian Lamo was found dead in Kansas at the age of 37. He gained fame for turning Chelsea Manning in to the authorities.

“There’s nothing suspicious about his death,” said Wichita police officer Charley Davidson, though no further information or cause of death has been given, The Wichita Eagle reported.

The Guardian was not given any more information when staff contacted the coroner’s office about the cause of death.

Lamo was arrested in 2004 for hacking into The New York Times and Microsoft, according to the Eagle. He told a court that Manning contacted him because of his notoriety in the hacking community.

“With great sadness and a broken heart I have to let know all of Adrian’s friends and acquittances that he is dead. A bright mind and compassionate soul is gone, he was my beloved son…” wrote Lamo’s father, Mario Lamo, via Facebook.

“His was a kind and principled man. He stood alone in the face of extreme difficulties that few of us can imagine; all to do what he knew to be right,” wrote Tommy Chan, commenting on the post. “The world would solemnly find another of his unique combination of intellect & character.”

Chelsea Manning was sentenced to 35 years in prison for leaking the largest trove of government secrets in the history of the United States – over 700,000 documents – according to ABC News. His sentence was commuted by former President Obama. He ended up only serving seven years, according to Fox News.

Ungrateful TRAITOR Chelsea Manning, who should never have been released from prison, is now calling President Obama a weak leader. Terrible!

According to an interview with ABC, some of the classified information Manning made public ended up in the hands of Saddam Hussein. Manning responded by saying that “It’s not black and white, it’s complicated.”

they dont protect anyone's country anymore, we need to dismantle the bloated intel/police/military state before it destroys everyone ??? https://t.co/QNkFDP4Ugl

Manning has also recently filed to run for the U.S. Senate in the state of Maryland, according to Fox News.