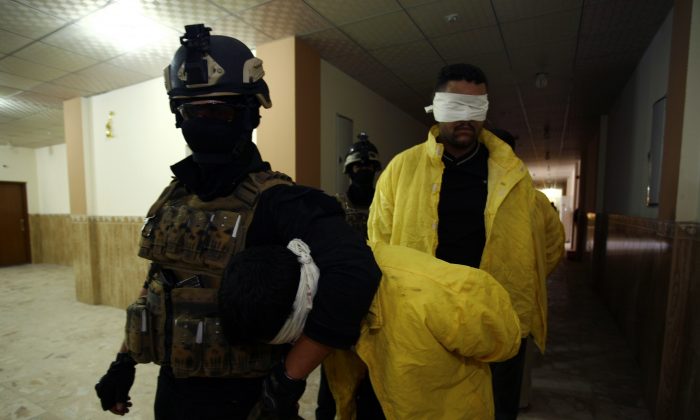 Hackers released a list showing the phone numbers and home addresses of nine alleged ISIS recruiters, in countries including Turkey, Indonesia, Kuwait, and Iraq. Alongside this, one of the hackers behind the leak detailed how the terrorist organization recruits members using the Internet.

According to the hacker, who goes by the moniker “JhonJoe,” a favorite venue for ISIS recruiters is Twitter. When the recruiters find someone who expresses views similar to their own, they’ll make contact using the direct message function on Twitter.

“We ran a sting operation to uncover this,” said JhonJoe, in an interview on Twitter.

If the targeted individual cannot travel, the ISIS recruiter tries convincing them to launch terrorist attacks wherever they are.

JhonJoe provided Epoch Times with one of his chat logs with one of the ISIS recruiters. It shows the two going back and forth about traveling to Syria, or carrying out the terrorist organization’s campaign of murder locally.

The recruiter tries convincing him he “must act.” When the undercover hacker said he could not travel to Syria, the recruiter told him to “kill” people in his own town, saying “Stab them. Then stab some more, and after that, keep stabbing, until they are all dead.”

JhonJoe is part of a larger operation being launched against ISIS by several groups of hackers, in what they’re calling #OpISIS. Among the groups involved are GhostSec, CtrlSec, and the hacker collective Anonymous.

Their operations take all forms—some hackers take ISIS websites offline, some go after ISIS social media accounts, others go after the people behind the accounts.

Leading members of GhostSec recently detailed some of their work in an interview with Epoch Times. The hacker group helped prevent a terrorist attack in Tunisia, and may have prevented a similar attack in New York.

Some of the conflicts between the hackers and ISIS recruiters can get heated. One of the alleged amateur recruiters, who goes by VancePedroso on Twitter, called out the hackers on Sept. 2 saying “@TheBinarySec @AnonTerminal hack my account Kuffar if you can!” (The word “Kuffar” means infidel.)

Just two days later, the hackers released his personal information, including his phone numbers and home address in the Philippines.

They then sent him a message on Twitter, with a screen shot of the FBI tips page, letting him know “your location was sent to the FBI.”

.@VancePedroso Stop crying in the DM’s for me to delete your dox. Your location was sent to the @FBI. #OpISIS pic.twitter.com/czO0u12qPX

Some of the hacker groups differ in ideology. Anonymous, for example, tends to be more anarchistic, while GhostSec actively provides information to governments on the activities of ISIS.

Yet, they’ve united under one banner for #OpISIS, with a shared belief that putting an end to online recruitment and propaganda channels of the terrorist organization is helping protect innocent people.

“My motivation is to stop the brutality,” JhonJoe said, noting that after ISIS executed former journalist James Foley in a widely broadcast video, “I knew that someone had to stop them.”

“I take time out of my day to do this because the world is in danger, humanity is in danger,” he said. “It is my duty, as a human being, to stand up.”