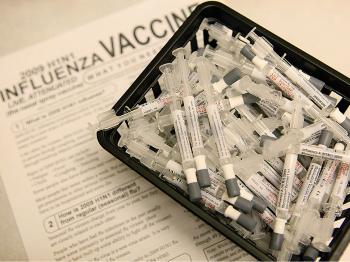 SWINE FLU OUTBREAK: Doses of H1N1 influenza vaccine sit in a basket at Rush University Medical Center Oct. 2009 in Chicago, Illinois. Senegal has reported 14 cases of the flu but has the situation under control according to the Senegalese Minister of Heal (Scott Olson/Getty Images)
Africa

By Epoch Times Staff
biggersmaller
Print
Senegal has confirmed 14 cases of (A) H1N1—similar to swine flu, but caused by A influenza virus—in three cities in the west and central part of the country according to a Senegal news agency Afrique en Ligne.

French language site, Seneweb.com, reported that Senegalese minister of Health and Prevention, Modou Diagne Fada, said in a press conference Monday that no one has died from the infection and all those infected have been treated and sent home.

He also reassured citizens that Senegal has the means to handle the outbreak, that vaccines are available, and that the World Health Organization (WHO) has promised to make more vaccines available by April at the latest.