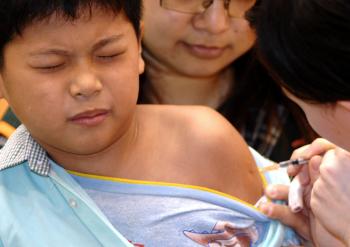 FLU JAB: A boy receives an injection of swine flu vaccine.
US

H1N1 No Worse Than the Seasonal Flu, Health Official Says

By Joan Delaney
Print
As the government ramps up its H1N1 vaccination program, a former Ontario chief medical officer of health says the seriousness of the swine flu outbreak has been overstated.

Dr. Richard Schabas, now the chief medical officer of health for Hastings and Prince Edward Counties in eastern Ontario, says health officials have over-reacted to the significance of H1N1.

“I think it's likely to turn out to be comparable in severity to seasonal flu. I said back in May that there's no need to panic, that this was not going to be a severe problem, and I believe that insight was correct,” says Schabas.

He says health officials should have observed how the virus behaved in Mexico, in Canada last spring, and in the southern hemisphere during its winter flu season. H1N1 ran its course in Australia over a period of about 14 weeks and ended, without a vaccine, around mid-August.

“I think there was overwhelming evidence by then that this was not going to be a serious event.”

Schabas points out that in early August the World Health Organization (WHO) published an assessment concluding that the outbreaks in the temperate countries of the southern hemisphere were only slightly worse than those seen in a typical flu season.

“That's exactly what we should have been expecting here,” he says.

“That doesn't mean that we shouldn't have worked on the vaccine, but the unfortunate thing with the vaccine is that it fundamentally came too late in Canada to make very much of a difference. But I think public health officials, particularly in Ontario and British Columbia, need to recognize that there's very little purpose going around and immunizing healthy people at this point in time, because the outbreaks are ending.”

However, Dr. David Butler-Jones, Canada's chief public health officer, said at a press conference on Friday that “complacency is not warranted even when we've reached the peak, whenever that might occur. We will still have that other side of the hill to come down which means millions more potentially infected.”

The Public Health Agency of Canada estimates that the death toll from the seasonal flu ranges between 700 and 2,500 a year. The total number of H1N1 deaths across the country as of this week was 198.

Butler-Jones said the chances of someone dying from H1N1 is “actually very, very small, but when you spread that over millions and millions of people it is a large number.” He said the virus is “totally unpredictable.”

Public health officials announced Friday that over 8 million more doses of the H1N1 vaccine will be made available to Canadians in the coming weeks. To date, more than 8.5 million doses of the vaccine have been administered in Canada.

The cost of the national inoculation program is reported to be $1.51-billion and growing—far higher than the $806-million initially estimated. Schabas thinks the huge investments governments are making in the program might not be justified, as does Alan Cassels.

“It's an awful lot of money on a very small threat,” says Cassels, a drug policy researcher affiliated with the School of Health Information Sciences at the University of Victoria.

“I think that is absolutely tragic when you consider the real killers out there—tuberculosis, AIDS, diseases of poverty.”

Cassels believes WHO may have jumped the gun in declaring H1N1 a pandemic, pointing out that in 2005 the organization predicted that up to 150 million people worldwide could die from the Avian flu. The eventual death toll was 262 people.

In 1976, the U.S. government greatly miscalculated a swine flu outbreak—since dubbed the swine flu fiasco. Although infections were not found outside Fort Dix in New Jersey, the H1N1 strain prompted a mass immunization effort across the country.

In the end, the flu killed one person out of about 200 cases. However, side-effects from the vaccine caused 500 cases of Guillain Barré syndrome and 25 deaths. The vaccine was withdrawn after 10 weeks when the link with the neurological disease became evident. The U.S. government eventually paid out $90 million in damages.

Butler-Jones said at a press conference on Tuesday that one person has died in Canada from the H1N1 vaccine while 36 have reported serious adverse reactions—mostly anaphylactic reactions or convulsions brought on by fever.

Schabas laments the fact that many aspects of public health, including Ontario’s anti-smoking program, have been put on hold while resources are directed to the H1N1 outbreak.

“I think we will find that tobacco will kill in Canada this year in the neighbourhood of at least 100 times as many people as H1N1. I'm of the opinion that it's time we got back to our real work,” he said.