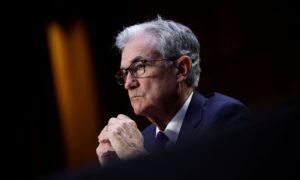 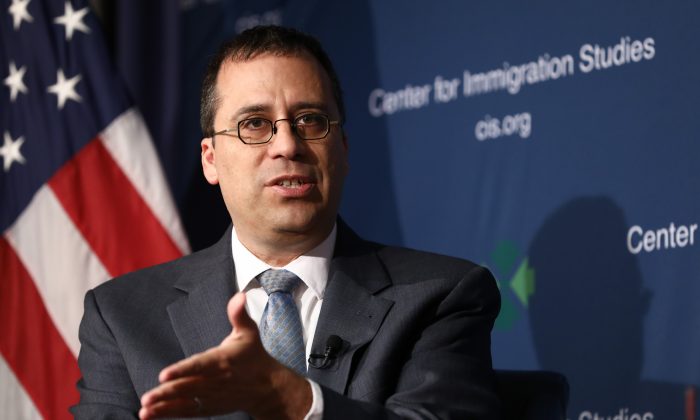 Francis Cissna, Director of U.S. Citizenship and Immigration Services, talks about the agency's challenges at the National Press Club in Washington on Aug. 15, 2018. (Samira Bouaou/The Epoch Times)
US News

WASHINGTON—Although not much tinkering can be done without Congress, the head of U.S. Citizenship and Immigration Services (USCIS) said issues surrounding visas such as the H-1B need to be addressed, but without causing harm to American workers.

The H-1B is a non-immigrant visa that allows foreigners to work in the United States for three years, with options to renew it. Silicon Valley companies are the heaviest users of the H-1B visa, bringing in workers largely from India.

The visas are currently decided through a lottery system and capped at 65,000 per year, with an added 20,000 for those with master’s degrees or higher.

Americans are unable to vie for the positions offered through H-1B visas—a point some lawmakers are trying to resolve through legislation.

The director of USCIS, Francis Cissna, said he can “totally understand” how an employer can be frustrated by identifying a potential employee on a university campus, but being unable to get an H-1B visa for them because the program is oversubscribed.

“The cap is not sufficiently high to guarantee that person getting a work visa. I can completely understand how frustrating that would be to the employer,” Cissna said during a discussion with the Center for Immigration Studies in Washington on Aug. 15.

He said it’s up to Congress to address that.

But, he warned, any reforms need to be mindful of the possible adverse effects on American workers.

“A simple fix, for example, [could be] just banning the ability of employers to fire American workers and replace them with H-1B’s,” he said. “We all know it’s happened. I am talking about … intentional replacement of American workers with foreign workers. Things like that need to be taken into account.”

Last year, in his Buy American, Hire American initiative, President Donald Trump called on federal departments to propose reforms to curb H-1B abuses and ensure visas are awarded to the most skilled or highest-paid applicants.

“Right now, H-1B visas are awarded in a totally random lottery, and that’s wrong,” Trump said on April 18, 2017, in Wisconsin as he unveiled the initiative. “Instead, they should be given to the most skilled and highest-paid applicants, and they should never, ever be used to replace Americans.”

Cissna said, so far, only “relatively small” changes have been imposed on the H-1B process and other work visas.

“For example, asking adjudicators to look more carefully at whether the wages that are being proffered to the worker correspond to the skill level of the job,” he said.

“That is a completely rational thing to do, and if it requires more evidence to substantiate the connection between the proffered wage and the skill level, so be it.”

The agency is also working on rescinding the regulation issued by the Obama administration in 2015 that allows spouses of H-1B visas to also get work authorization.

Cissna said Congress only identified two categories of people who should receive spousal work permits when it set up the H-4 category—spouses of intra-company transferees and to the spouses of E investor visa and treaty investor visa workers.

“They said that those two categories of people. … They didn’t talk about H-1B’s,” he said.

“The idea that we are intentionally, mischievously, impishly, malevolently trying to build an invisible wall on purpose because we don’t want foreign workers to come, is false.”

About a week after Cissna’s interview, CEOs of the Business Roundtable penned a letter to Kirstjen Nielsen, secretary of the Department of Homeland Security, under which USCIS operates.

The letter expressed the CEOs’ “serious concern about changes in immigration policy that are causing considerable anxiety for many thousands of our employees, while threatening to disrupt company operations.”

It was signed by 59 of America’s most prominent CEOs, from companies such as Apple, Morgan Stanley, American Airlines, Verizon, and JPMorgan Chase. The Business Roundtable CEOs lead companies with more than 16 million employees and more than $7 trillion in annual revenues, according to its website.

The CEOs complained about “inconsistent immigration decisions,” uncertainty about information required for visa renewals, and the upcoming change that would revoke the H-4 spouse eligibility to work.

The CEOs also complained about USCIS’s recent announcement that a visa holder will be automatically placed in removal proceedings if his or her application to change or extend status is denied and he or she doesn’t have another underlying lawful status.

“Together, the USCIS actions significantly increase the likelihood that a long-term employee—who has followed the rules and who has been authorized by the U.S. government multiple times to work in the United States—will lose his or her status,” the letter states.

Cissna said fraud and abuse is an “eternal problem” with administering the immigration system, but the agency is set up to simply follow the laws Congress sets. He said the increase in interviews required for work permits is already helping reduce fraudulent claims.

Using the example of someone first entering the United States on a tourist visa, Cissna outlined a possible scenario that indicates how flawed the current system can be.

The person could then also receive an Optional Practical Training work permit, allowing for up to three additional years of work.

“So, you could have a person here for a dozen years, and we never talk to them,” Cissna said. “I think the administration is focusing on vetting and screening because you have things like that—where people could be here a long time and they have no physical contact, much less an actual interview, with an immigration officer.”