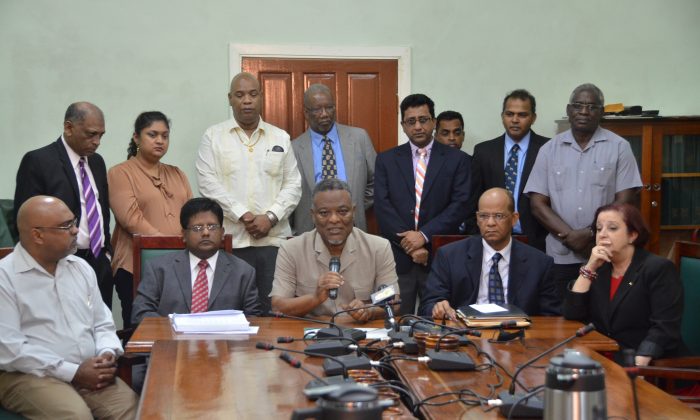 Some members of the ruling PPP/C administration
News

Georgetown – Guyana;  When Guyana’s tenth parliament came out of recess on the 10 October, 2014, its incumbent Prime Minister, and by extension, its President, refused to reconvene a sitting of the House.

For an embattled government, not reconvening the tenth parliament was the obvious strategic thing to do, since Guyana’s combine opposition parties (the AFC and APNU), were unequivocally bent on passing a no-confidence motion against the ruling administration, once they could have gotten their day in parliament.

However, Guyana’s aging President Donald Ramotar, being somewhat fearful of such a motion, vehemently refused to allow the parliament to sit again, or at least so it seemed.

But on the 2 November, 2014, and to the surprise of many, the President appeared to have reversed his initial position and announced that his administration had given the green light for the tenth parliament to be reconvened from the 10 November, 2014.

Upon hearing the announcement, no one had seemed to actually understood why the President had abruptly reversed his position and announced that date, knowing that he risked going for a potentially losing battle in an opposition controlled parliament.

For others, the evolving belief was that the PPP government was becoming cornered by the opposition and was under Western Pressure.

But on Monday the 10th November, 2014, the Guyanese leader made another twist to the parliamentary drama by deciding to prorogue Parliament ostensibly to stave off the debate of a no-confidence motion that would have subsequently saw the holding of General elections within 90 days, thereafter.

For the opposition and the election inclined sectors of the Guyanese population, the prorogue step taken by President Donald Ramotar was a poor power holding strategy that would inevitably become redundant once the six months period allowable by Guyanese laws for parliamentary prorogation, are exhausted.

But if we are to believe the analysis of one of Britain’s leading minds in post colonial political observations, then we may want to accept that the Guyanese President had no intention of allowing a parliamentary sitting. Instead, he had simply commenced a politically strategic process that would allow him to rule Guyana until the constitutionally due date for General Elections in 2016.

According to his muted analysis, (name withheld) a leading British Political Strategist at the University of Kent, suggested that the ruling PPP government had most likely hoodwinked the joint opposition out of curtailing the President’s hold on power.

The expert reasoned that the PPP must have drawn up a timetable aimed at frustrating the opposition efforts to remove it by way of a no-confidence motion, at least technically.

According to the Kenyan born professor, proroguing Guyana’s parliament on the 10th November, would allow the incumbent to avoid a no confidence motion, at least up to the 9th of May, 2015. But in an effort to create a constitutional stalemate, the government would most likely wait until the last day in April 2015 or thereabout, to announce a date for local government elections.

And by all accepted accounts in Guyana, both elections cannot be held in the same year, in any case.

He suffice that this would either create a constitutional issue or may force the opposition to concede to the holding of local government elections if the resources for that democratic process is already in place.
But in either case, preparations for a general election would no longer be possible until after September 2015, when the Guyana’s Election Commission would have been hopefully ready to commence a new claims and objections phase for a new voter’s list, as is required by law for the holding of general elections.

Again, this would push the entire process into 2016, and paving the way for any general elections to be held until after April of that year.

Thus, taking all of this into account, the PPP has seemingly crafted a strategy aimed at turning the opposition’s no-confidence motion into nothing more than the name of a dead horse on a racing list.

And while this may seem inconceivable to some, the whole proroguing drama is now becoming more obvious to others, as a potentially classic political game piece.

So if this seemingly convenient interpretation holds any political merit whatsoever, then Guyana’s political opposition’s hope of a no-confidence motion may be wrapped in a web that is almost impossible to escape.

But if this analysis is nothing more than a constitutionally inconceivable thought, then I guess the electorate in Guyana do not have anything to worry about.