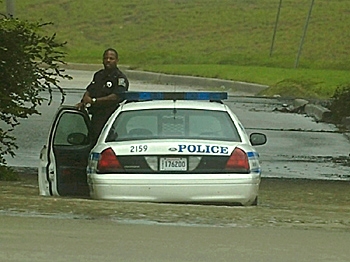 A police officer waits for assistance after his car stalled in flood waters in New Orleans, Louisiana. (Stephen Morton/Getty Images)
US

By Shaoshao Chen
Print
HOUSTON—Hurricane Gustav slammed into the U.S. Gulf Coast on Monday with less power than previously predicted.

The storm made landfall at the southern Louisiana town of Cocodrie about 80 miles west of New Orleans as a Category 2 storm with sustained winds of over 110 miles per hour showering the coast from Florida to Texas with heavy rain and high winds.

The weakened storm brought a sigh of relief to Gulf Coast residents who had earlier feared Gustav would batter the coast as powerful Category 4 storm with winds of over 155 miles per hour.

By Monday evening, Gustav had slowed into a Category 1 storm with winds of only 75 miles per hour, said the National Hurricane Center.

The New Orleans levees so far are holding surging flood waters out of the city.

According to the U.S. Geological Survey, Gustav caused an almost 9-foot storm surge in Pointe a La Hache, Louisiana, about 40 miles southeast of New Orleans, with another 1 to 3 feet of surge expected soon.

Over the weekend, over 2 million residents fled the Gulf coast fearing a repeat of the devastation caused by Hurricane Katrina and Rita. The residents are urged by Homeland Security Secretary Michael Chertoff not to return home until damage could be assessed. Only 10,000 residents are believed to have stayed behind after mandatory evacuation was ordered for New Orleans

According to the Louisiana governor’s office, high winds from the storm knocked out power for over 800,000 residents and it may take over two weeks of repair before power is restored.

Louisiana’s largest energy provider, Entergy, said the large number of residents without power was due to wide spread damage to its distribution system.

Over 14,000 National Guard troops and pilots were deployed into the Gulf Coast. The Department of Defense also authorized 50,000 troops into the area.

Louisiana Governor Bobby Jindal warns residents that the danger is not over yet and warms residents in Baton Rouge and central Louisiana should brace for high winds at 70 to 80 miles per hour as Gustav tears through the state.