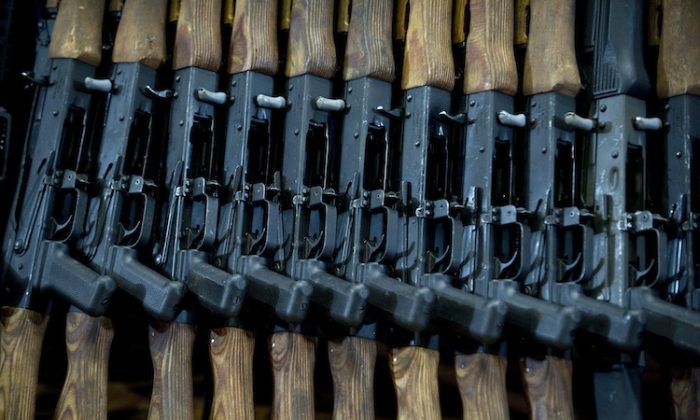 Guns seized in the arrest of Raul Hernandez Lechuga, an alleged member of Los Zetas drug cartel, on display in Mexico City, on Dec. 13, 2011. Not known to be guns of the "Fast and Furious" program. (Ronaldo Schemidt/AFP/Getty Images)
US

At least 57 new guns from the Obama administration’s Fast and Furious program have been linked to violent crimes in Mexico, including at least two massacres, according to a report from the Spanish-language Univision television station.

The report said that “dozens of people” were shot and killed with weapons derived from the flawed program that sent around 2,000 guns—mostly automatic rifles—to Mexico in order to trace them to drug cartels and other criminals. However, very few of the guns were recovered and the program was subjected to a congressional inquiry.

The 57 new guns had not been previously identified as weapons belonging to the program.

In one of the massacres, cartel members shot and killed 16 people at a birthday party in Ciudad Juarez, Mexico, according to Univision.

Last month, a report from the Justice Department’s Office of the Inspector General found that there were numerous problems with the program, but found there was no evidence Attorney General Eric Holder knew of the program.