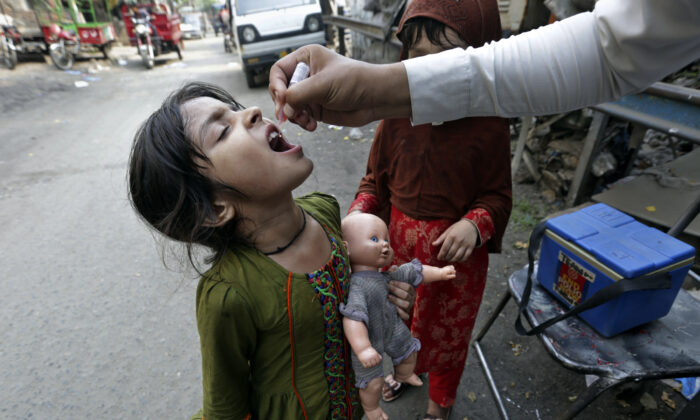 A health worker gives a polio vaccine to a girl on a street in Lahore, Pakistan, on June 27, 2022. Pakistan launched a new anti-polio drive on Monday, with the goal to vaccinate a million children across Pakistan. (K.M. Chaudary/AP Photo)
Asia & Pacific

No one immediately claimed responsibility for the attack in North Waziristan, a district in the Khyber Pakhtunkhwa province. The attack came a day after the government launched another nationwide anti-polio campaign amid a spike in attacks.

Since April, Pakistan has registered 11 new polio cases—all in North Waziristan, where parents often refuse to inoculate children. The outbreak has been a blow to the Islamic nation’s efforts to eradicate the disease, which can cause severe paralysis in children.

Pakistan and Afghanistan are the only countries in the world where polio remains endemic. In 2021, Pakistan reported only one case, raising hopes it was close to eradicating polio.

North Waziristan was a base for myriad terrorist groups, including the Pakistani Taliban, until a massive military offensive in recent years claimed to have cleared the region, forcing many terrorists to flee to Afghanistan. But attacks have been increasing lately, adding to concerns the assaults could further jeopardize anti-polio campaigns.

The U.N. children’s agency took to Twitter to condemn the attack, saying “@UNICEF joins @GovtofPakistan in condemning the attack which reportedly killed a polio worker & security personnel & injured a child in North Waziristan. Those killed were among hundreds of thousands of heroes who work selflessly to #EndPolio. We express our sympathy to families.”

Earlier, UNICEF posted an appeal on Twitter, urging parents to inoculate their children. The goal of the latest campaign was to vaccinate 12.6 million children under the age of 5 across Pakistan.

“Together, we can #EndPolio! Please make sure that every child is immunized against this deadly virus,” UNICEF said.

Shahzad Baig, a coordinator for Pakistan’s polio program, also urged “all parents and caregivers to get their children vaccinated instead of hiding them or refusing to (let them) take the necessary drops.”

“It is important to realize that the polio virus still exists in our surroundings and no child is safe until all children are truly vaccinated,” Baig added.

Shuja Khan, a Pakistani father whose son was stricken by polio in North Waziristan, posted a video message on Twitter. Holding his boy in his lap, he appealed on parents to inoculate their children and avoid his family’s ordeal.

Until this week, Pakistan’s health authorities had carried out three nationwide anti-polio drives this year—in January, March and in May. During the March campaign, gunmen in northwestern Pakistan shot and killed a female polio worker as she was returning home after a day of vaccinations.

And in January, gunmen shot and killed a police officer providing security for polio vaccination workers, also in the country’s northwest.