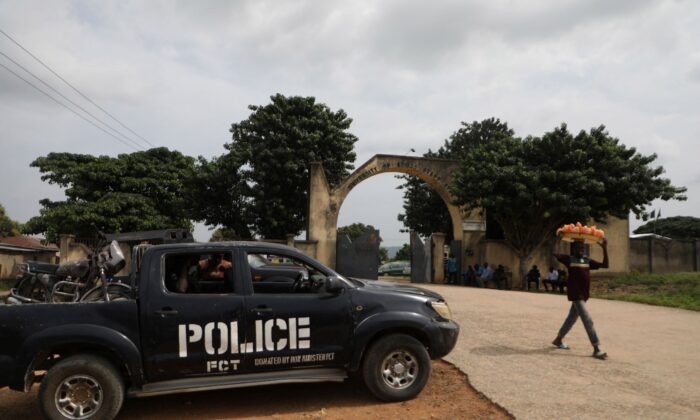 A police truck is stationed in Abuja, Nigeria, on Nov. 2, 2021. (Kola Sulaimon/AFP via Getty Images)
Africa

Police in Benue confirmed the attack. The assailants shot 12 people to death in one community then moved on to another where they killed two more villagers, Hemba said. He said 15 people were “seriously injured.”

He identified the attackers as “Fulani herdsmen,” a group of mostly young pastoralists from the Fulani tribe caught up in Nigeria’s conflict between host communities and herdsmen over limited access to water and land.

In Nigeria’s middle belt and central regions, deadly clashes between local communities and herdsmen continue in a cycle of violence that has defied government measures, although security forces have recently announced some arrests and seizure of arms.

A similar attack in another part of Benue targeted a convoy of soldiers of the Nigerian army, but they were able to repel the assailants, Hemba said.

Many of the attacks in rural areas are similar. Motorcycle-riding gunmen often arrive in the hundreds in areas where Nigeria’s security forces are outnumbered and outgunned.

Authorities have in the past admitted that the inadequate number of security personnel in many of the affected areas is one of the major reasons the attacks have continued.

Nigerian President Muhammadu Buhari, who came into office in 2015 on a wave of goodwill after promising to end the nation’s protracted security crisis, leaves office in 2023. Those security challenges are back on the front burner as political campaigns for next year’s election begin.