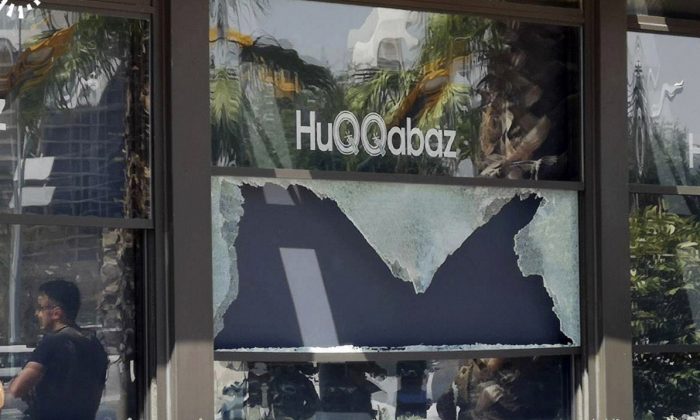 An Irbil-based Kurdish broadcaster, shows broken glass shows in the window of a restaurant that was the scene of a shooting, in Irbil, Iraq, on July 17, 2019. (RUudaw Facebook TV via AP)
Middle East

IRBIL, Iraq—Unknown gunmen opened fire inside a Turkish-owned restaurant in the northern Iraqi city of Irbil on July 17, killing at least one Turkish diplomat stationed in Ankara’s consulate and one Iraqi civilian, Turkish officials and Kurdish security forces said.

The rare shooting in broad daylight jolted the normally quiet city and sent security forces into the streets in an effort to catch the perpetrators, who apparently got away. Turkish President Recep Tayyip Erdogan condemned the “hateful” attack targeting the Turkish consulate employees and said Turkey was pressing Iraqi and local authorities for the assailants to be apprehended quickly.

The state-run Iraqi news agency identified one of the victims as the deputy general consul at the Turkish consulate.

Turkish Foreign Minister Mevlut Cavusoglu said the attack on the restaurant was carried out by three people. The assailants also fired at Iraqi nationals sitting at a table next to Turkish consulate employees, killing one of them and seriously injuring one other, the minister said.

Such attacks are rare in Irbil. Iraq’s self-governing Kurdish region is politically allied with the Turkish government, but terrorists of the Kurdistan Workers’ Party (PKK), who have fought a decades-long insurgency against Ankara, operate in parts of the territory. The U.S. government and Ankara label the group a terrorist organization.

In recent months, the Turkish military has intensified air and ground operations against them across the border.

The shooting occurred at HuQQabaz, a popular, Turkish-owned restaurant in an upscale and high-security area only a five-minute drive from the Turkish consulate on the airport road.

Security forces sealed off the area, keeping journalists on the other side of the road as ambulances arrived on the scene. The front window facade of the restaurant was shattered and police stood outside.

The Kurdish Rudaw news agency published a photo of a car parked outside the restaurant with bloodstains on it. It said security and emergency officials were responding to the incident and that the scene was on lockdown.

Anadolu Agency, quoting the restaurant’s owner, reported that an attacker in civilian clothes and carrying two weapons opened fire at a group of consulate workers shortly after they entered the restaurant and said a Turkish diplomat died at the site. The Turkish Foreign Ministry said an official of the Turkish consulate in Irbil was “martyred” as a result of an armed attack.

Kurdish security forces later said a Turkish diplomat and an Iraqi civilian were killed and another civilian wounded in the attack.

“We are continuing our efforts with the Iraqi authorities and local authorities to quickly find the perpetrators of the attack,” the Turkish Foreign Ministry said. Ibrahim Kalin, spokesman for Turkish President Recep Tayyip Erdogan, said on Twitter that efforts were underway to catch the assailants.

“The necessary response will be given to those who carried out this treacherous attack,” he said.

There was no immediate claim of responsibility for the shooting.

Asked whether the attack could be the work of the PKK, Cavusoglu said it was not yet clear if the shooting was a terror attack by the group, saying Iraqis at the restaurant were also targeted.

“We are continuing our contacts so that details concerning the issue of the apprehension of the assailants, and what is behind the attack, are brought to light,” Cavusoglu said.

The attack came days after Turkey’s Defense Ministry announced it launched a new military operation against Kurdish terrorists in northern Iraq. In a statement issued Saturday, the ministry announced the start of “Operation Claw-2” aiming to destroy caves and shelters used by members of the PKK in the Hakurk region. It said the operation began late Friday with commandos, airstrikes, and artillery.

On Wednesday, Turkey launched airstrikes that killed at least seven members of the PKK.

The PKK has been waging an insurgency for more than three decades, and its fighters have bases in northern Iraq, near the border with Iran. Turkey has regularly bombed the mountainous area where the PKK are based and in March targeted a meeting of senior PKK leadership there, wounding a senior commander and killing three others.

Ankara accuses the PKK of launching assaults into Turkey from the Kurdistan region and has kept bases in Iraq and targeted the terrorist stronghold for decades, an agreement it had reached with the previous Iraqi regime under Saddam Hussein where the two countries agreed to use each other’s territories to safeguard their borders.

By Salar Salim And Suzan Fraser