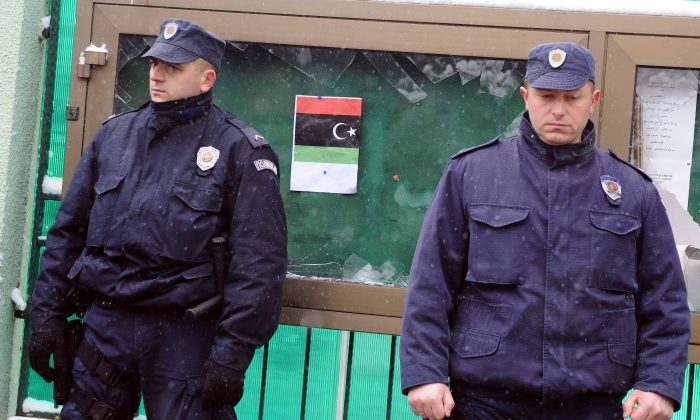 Serbian policemen stand guard in front of the Libyan embassy in Belgrade on Feb. 22, 2011. Some 30 people, mostly Libyans or Serbian citizens of Libyan origin, protested on Feb. 22 in front of the Arab country's embassy against the regime of Muammar al-Qaddafi. The protesters broke the windows of a showcase in front of the embassy, situated in the posh Belgrade area of Dedinje and also tore portraits of Qaddafi, replacing them with an old red-black-green Libyan flag. (Andrej Isakovic/AFP/Getty Images)
Middle East

BELGRADE, Serbia—Gunmen in Libya crashed into a convoy of vehicles taking Serbia’s ambassador to neighboring Tunisia and then kidnapped two other embassy employees, officials said.

The ministry is “doing all it can to get more information and secure the return of our citizens in a very complicated situation on the ground,” a statement said.

Ambassador Oliver Potezica, who escaped unharmed and was traveling in the three-vehicle convoy with his wife and two sons aged 8 and 14, later recounted the attack.

“It happened like in a movie,” Potezica told Tanjug news agency from Tunisia. “The attack happened when one of the embassy cars was hit from behind. When the driver came out to check what happened, he was dragged into one of the attackers’ cars.”

One of the Libyan security officers traveling with the convoy was wounded when hit by a spray of gunfire during the attack and taken to a hospital, the ambassador said.

The kidnapping “looked more like a criminal than a political act,” Potezica said.

In Libya, a member of Sabratha’s council said that the convoy had stopped at a motel on their way to Tunisia and then resumed their journey.

“They were ambushed by an armed group, and the vehicle carrying the ambassador and his wife managed to escape the ambush, but the group managed to stop the vehicle behind it, which had two embassy staff,” council member Abdulghassim Krair said.

Military forces safely escorted the rest of the convoy to the Tunisian border, Krair said.

“We assured them that we will do our best to find the perpetrators and rescue the employees,” he said.

Krair added that the embassy hadn’t notified local authorities in advance about the trip, saying “it’s not safe to travel through the area unguarded.”

The motel was on the main road leading to Tunisia and close to the Mediterranean Sea in an area beset by smugglers and rouge militias. A number of kidnappings have been reported on the road recently.