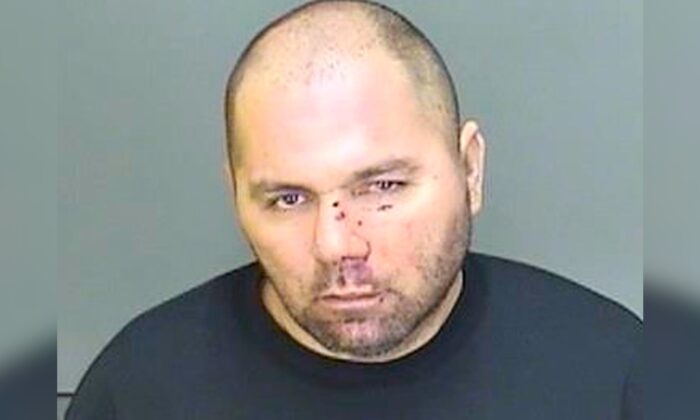 Gunman Who Killed 3 Daughters in Church Was in US Illegally

SACRAMENTO—The gunman who killed his three daughters, a chaperone who was supervising his visit with the children, and himself in a Northern California church this week was in the United States illegally, immigration officials said Friday.

David Mora, 39, was armed with what is often called a “ghost gun,” an unregistered, homemade semiautomatic rifle-style weapon. He had an illegal 30-round ammunition magazine and 17 bullets were fired, the Sacramento County Sheriff’s Office said.

Mora was under a restraining order that barred him from possessing a firearm and authorities do not know how or when he obtained it.

“The person who knows these answers is dead. I think I can safely say, he obtained it illegally,” sheriff’s spokesman Sgt. Rodney Grassmann said.

Mora had been living at the Sacramento church where the killings occurred since he was released from an involuntary mental health hold in April 2021 after threatening to harm himself and his estranged girlfriend, investigators said.

The violence erupted Monday during a weekly supervised visitation Mora had with his daughters, ages 13, 10, and 9. Investigators have revealed no motive. At the time, Mora was out on bail after being arrested five days earlier on charges of resisting arrest, battery on a police officer, and driving under the influence.

U.S. Immigration and Customs Enforcement spokeswoman Alethea Smock told The Associated Press that Mora was in the country illegally. He overstayed his visa after entering California from his native Mexico on Dec. 17, 2018.

She didn’t say when his visa expired. But because he overstayed his visa, ICE asked to be notified when he was released from jail after he was arrested in Merced County for assaulting the California Highway Patrol officer.

The Merced County Sheriff’s Office told the AP that under California’s so-called sanctuary state law, it does not notify immigration officials about in-custody people who are being released, and ICE was never notified. The 2017 state law restricts local law enforcement’s cooperation with federal officials except when immigrants are accused of very serious crimes.

“This unspeakable tragedy highlights the true cost, unintended or not, of sanctuary policies that prevent law enforcement from protecting its citizens,” Sacramento County Sheriff Scott Jones said in a statement.

Jones previously blamed U.S. immigration policy under former Democratic President Barack Obama for the slayings of two Northern California deputies in 2014 by a man who was in the country illegally. The accusation became the subject of an ad by former President Donald Trump in 2018.

Jones ran unsuccessfully as a Republican candidate for Congress in 2016 and is again running for Congress.

The weekly visitation was allowed under terms of a five-year restraining order obtained by Mora’s ex-girlfriend, who was the mother of the girls. The order said he had repeatedly threatened to kill her, scared their girls, and said he would kill himself.

In a response to a court filing for the order, Mora said he had no guns. His ex-girlfriend also said she was not aware of him having firearms.

It is not clear whether Mora, also known as David Fidel Mora Rojas, faced a significant danger of being deported despite immigration officials’ interest after his arrest. Although ICE had asked to be notified of Mora’s release, immigration officials did not take any additional steps to deport him after he was released on bail.

Under Democratic President Joe Biden, immigration officials put their priority for deportation on people whom they deem threats to public safety or national security or who recently crossed the border. That’s a departure from the Trump administration, which sought anyone in the country illegally for deportation.

By Don Thompson and Stefanie Dazio