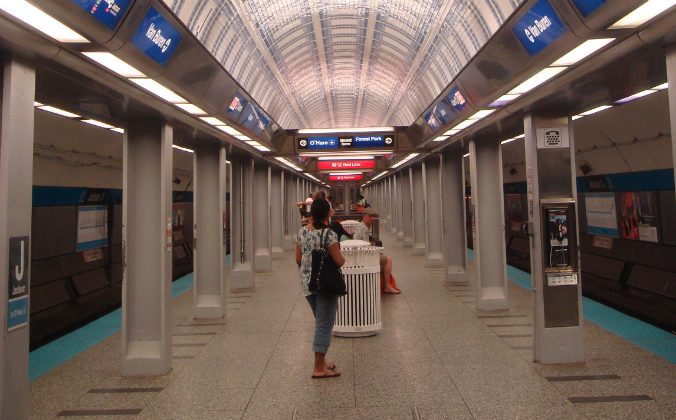 A lone gunman waited as a Chicago subway train arrived, and when the doors opened, fired shots at a 24-year-old man inside in a targeted attack, police say.

Panicked passengers scrambled without any clear instructions from the conductor on Thursday night at around 7:45 p.m.

First responders took the victim, who had wounds on his left arm and ankle, to a hospital. He is currently in stable condition, according to the Washington Post.

The shooter had waited for the victim on Chicago Transit Authority’s Jackson station, according to Chicago police deputy Supt. Kevin Navarro.

Navaro said that “as the doors opened up, he shot at the specific subject and ran.”

The police did not have a suspect in custody as of Friday morning. Detectives are looking at surveillance video to identify the shooter.

“Although this is a startling event, this is a very rare event,” Navarro said. “Shootings on public transportation are very rare.”

Train passengers complained about the lack of instruction from the conductor when the shots were fired, Chicago Tribune reported.

“You’re fearing for your life because you don’t know what’s going on,” said Andrew Lapin, 28, a freelance journalist. “It’s a total blind spot.”

Lapin felt trapped on the train and wondered if he was a sitting duck after hearing the shots.

“I don’t know what people are supposed to do in this situation,” he added.

Emergency personnel carried the victim off the train and out of the station via an escalator. The man was shirtless and had a white cloth covering his stomach, a wrap around his leg, and an oxygen mask on his face.

A woman followed the man closely as he was carried out on a stretcher. She was holding a Prada sneaker that belonged to the victim. The woman was weeping outside an ambulance when the stretcher was loaded in the back.

The victim was taken to Northwestern Memorial Hospital, police say.

Police officers were seen searching the area with weapons drawn.

Lapin, the freelance journalist, said that he was 4 or 5 cars from the shooting. He said some people were yelling for the conductor to close the doors because they did not feel safe.

“I was just very shocked that something so violent could happen in the Loop in the early evening,” Lapin said. “It just seemed really beyond the level of what I was expecting. It was scary.”

A 29-year-old woman, who did not give out her name, said that there was a brief argument before she saw the flash of a gun and heard a shot.

“Once we all hit the ground to take cover, I was still close to the stairs, so I slid myself down the stairs until I couldn’t see the top of the platform. Another girl was there and she reached out for me and we held hands and I ran out,” she said.

The woman was planning to go to a Coldplay concert, but lost all interest after witnessing the shooting.

“Just thinking about the terrorist attacks that have been happening, I was thinking I don’t want to be in a big venue. I’ve had enough for today,” she said.