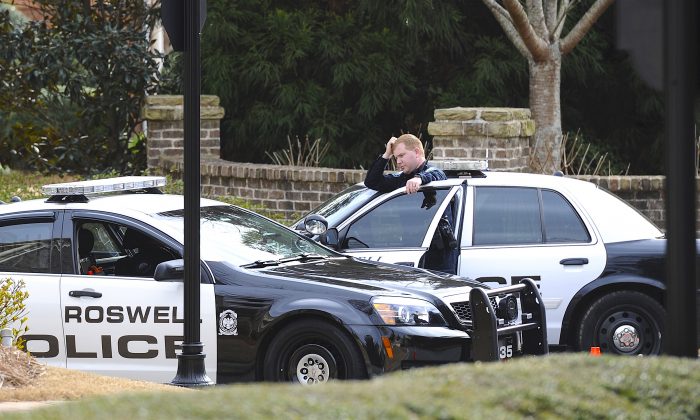 Roswell Police officers stand guard in this file photo taken on Jan. 31, 2015, in Roswell, Ga. Roswell police said on July 8, 2016, that one of their officers had been shot at. (AP Photo/John Amis)
US

ROSWELL, Ga.—Police in a metro Atlanta city say someone opened fire on an officer from a passing vehicle and was apprehended after a short pursuit.

Roswell police say the officer was on routine patrol when he was shot at shortly before 1 a.m. Friday.

Police said in a statement early Friday that the officer tried to stop the vehicle, and a short pursuit ended with the suspect crashing. The suspect was taken into custody.

Police said there were no reported injuries, and that no bullets struck the officer or his patrol car.

Police did not immediately provide any information about the suspect or any charges.

The shooting comes amid rising tension over police shootings and a Thursday night sniper attack that killed five officers during a protest in Dallas.

Roswell is about 20 miles north of Atlanta.