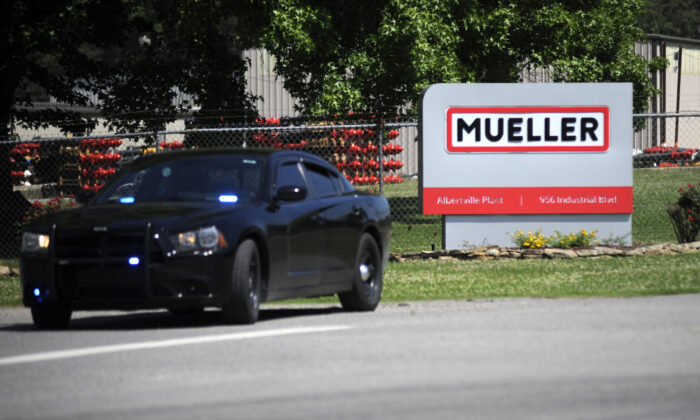 A police car guards the entrance to a Mueller Co. fire hydrant plant where police said multiple people were shot to death and others were wounded in Albertville, Ala., on June 15, 2021. (Jay Reeves/AP Photo)
Crime and Incidents

ALBERTVILLE, Ala.—A worker who killed two people and wounded two more at an Alabama fire hydrant plant early Tuesday has been found dead, apparently after killing himself in a car, a police chief said.

“The person was deceased from what appears to be a self-inflicted gunshot wound,” Police Chief Jamie Smith told Al.com.

The gunfire broke out about 2:30 a.m. at a Mueller Co. plant in Albertville, Smith told news outlets. The gunman then got in a vehicle and left the factory. His body was found hours later inside a car in Guntersville, about 15 miles (24 kilometers) away, Smith said.

Smith says it wasn’t immediately clear what prompted the shooting.

A company representative did not immediately respond to an email seeking comment.

Mueller Co., based in Cleveland, Tennessee, is a subsidiary of Atlanta-based Mueller Water Products Inc., which calls itself a leading maker of water distribution and measurement products in North America. More than 400 people work at the plant in Albertville, giving the city in northwest Alabama its nickname of “Fire Hydrant Capital of the World.”

A maintenance worker from North Carolina arrived at the plant early Tuesday, unaware of the deadly shooting hours earlier. John McFalls said he spent five days in the plant last week and saw nothing out of the ordinary.

“Everyone here was friendly,” he told Al.com. “Radios playing, everybody getting along.”

He swallowed hard as he heard what had happened, the news site reported.

“I was thinking about coming in early this morning and getting the jump on everything,” McFalls said. “It’s kind of shocking, and then it isn’t, given the state of the world.”