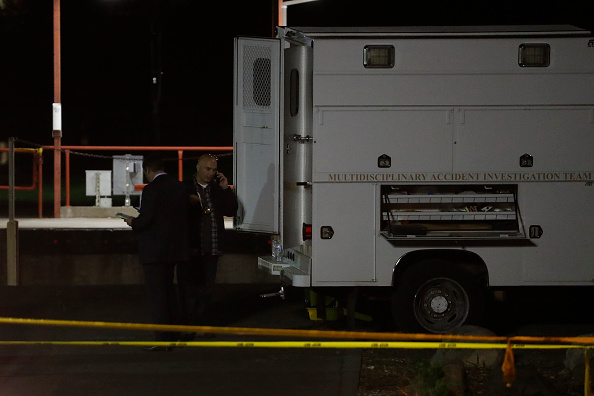 Law enforcement personnel are seen near a building after an active shooter turned hostage situation at the Veterans Home of California in Yountville, California on March 9, 2018 .(Stephen Lam/Getty Images)
Crime and Incidents

Three women were shot dead during a day-long standoff at a veterans home in California on Friday, March 9 after a gunman entered a staff meeting and held them hostage.

Authorities said the three women had dedicated their lives to helping veterans suffering from post-traumatic stress disorder (PTSD), and the gunman was a former patient at the Pathway Home treatment program for which they worked.

The Coroner’s Office identified the three victims as Christine Loeber, 48, executive director of the program; Jennifer Golick, 42, a clinical director; and Jennifer Gonzales, 29, a clinical psychologist.

According to the Associated Press, Wong was a former Army rifleman who served a year in Afghanistan and had undergone treatment for PTSD at the facility.

The gunman accused of killing 3 Yountville employees has been identified as 36-year-old Albert Wong, a former member of the Pathway Home Program: https://t.co/LISkPUPE25. pic.twitter.com/lqw01hUrCf

The motive behind the murders are still unclear, authorities said.

“It’s far too early to say if they were chosen at random,” Childs said during a news conference.

The siege began at about 10:30 a.m. local time and ended nearly 8 hours later.

The officers eventually entered the room where the hostages were known to have been held after no communication from the gunman for several hours, NPR reported. They found all four bodies there.

The Veterans Home of California, a residence for about 1,000 U.S. military veterans, is the largest facility of its kind in the United States. The Pathway Home is housed in a separate building on the campus.

“These brave women were accomplished professionals who dedicated their careers to serving our nation’s veterans and working closely with those in the greatest need of attention after deployments in Iraq and Afghanistan,” the statement read.

“All of us at The Pathway Home are devastated by today’s events. We stand with the families, friends, and colleagues who share in this terrible loss.”

“We are deeply saddened and affected by the tragic outcome of the hostage situation at the Veterans Home of California in Yountville and extend our deepest condolences to the loved ones involved.

“We ask for patience as we continue to monitor emerging details,” he wrote on Twitter.

We are deeply saddened and affected by the tragic outcome of the hostage situation at the Veterans Home of California in Yountville and extend our deepest condolences to the loved ones involved. We ask for patience as we continue to monitor emerging details.