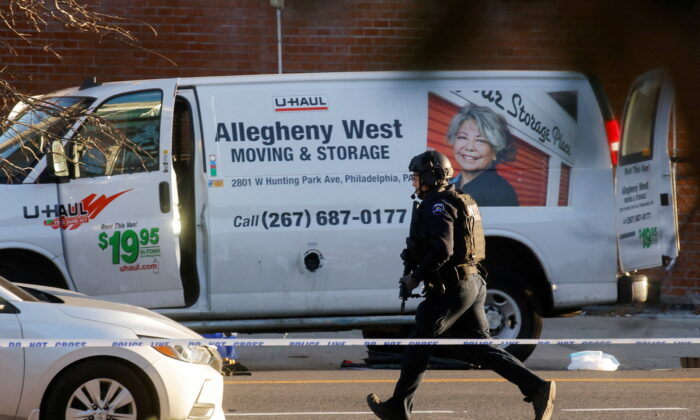 A police officer runs near a van that police say is connected with the shooting at a subway station in the Brooklyn borough of New York City on April 12, 2022. (Eduardo Munoz/Reuters)
Crime and Incidents

The gun used to shoot 10 people in New York City on April 12 was purchased legally, according to the Bureau of Alcohol, Tobacco, Firearms and Explosives (ATF).

ATF investigators were able to find records that showed Frank James purchased the firearm from a federal firearms licensee in Ohio in 2011, John DeVito, an ATF official, told reporters during a briefing on Wednesday.

“Essentially, we tied that gun utilized the shooting to our target, and now we have our target in custody,” DeVito said after James was arrested.

The timeline on the gun spans 16 years and five states, according to DeVito.

James Essig, an NYPD official, told reporters during a briefing that James has ties to Ohio, New Jersey, and New York in addition to Wisconsin and Pennsylvania.

He was arrested in New York nine times between 1992 and 1998, including for possession of burglary tools, a criminal sex act, criminal tampering, and theft.

The arrests were for trespass, larceny, and disorderly conduct.

The lack of a felony conviction enabled James to buy a gun legally, Essig said.

The gun, a container carrying gasoline, and a U-Haul key were recovered in a bag left at the scene of the crime. Bank cards, including a debit card issued by a bank in the name of Frank James, were also found.

A storage unit in Philadelphia registered to James was raided. Law enforcement agents recovered 9 mm ammunition and a 9 mm pistol barrel. An apartment rented by James was also raided, with a taser, a smoke canister, and an empty magazine for a Glock handgun located inside.

U-Haul records showed James rented a U-Haul in Philadelphia on April 11 at approximately 2:03 p.m. and surveillance cameras showed the U-Haul enter Brooklyn at approximately 4:11 a.m. the following day, several hours before the attack.

A camera in Brooklyn recorded a person wearing a hard hat and a construction-style vest leaving the U-Haul on foot. Footage from the transit system showed James in the gear entering the subway.

At about 8:40 a.m., a camera recorded a person who appeared to be James exiting the subway one stop away from the location of the attack.

James was taken into custody on Wednesday, over 24 hours after the shooting.

Breon Peace, U.S. attorney for the Eastern District of New York, said James would be charged with multiple counts. He has already been charged with one count of violating a federal law that prohibits terrorist attacks and other violence against mass transportation systems.