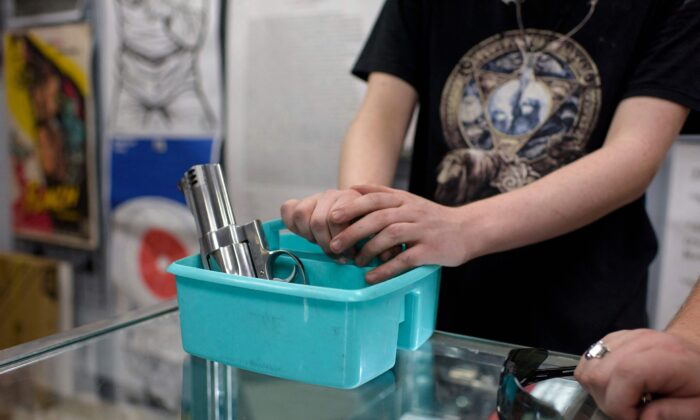 A customer waits to try out a pistol at Full Armor Firearms store in Houston on June 17, 2021. (Mark Felix/AFP via Getty Images)
US News

Gun purchases in 2021 have already topped purchases across 2019, continuing a strong buying trend that started during the COVID-19 pandemic.

September saw 1.3 million background checks for gun sales, according to an analysis by the National Shooting Sports Foundation (NSSF), a firearm industry trade association. That means 13.7 million such checks have been completed in 2021, surpassing the 13.2 million recorded in 2019.

Because of the pandemic, 2020 was a banner year for gun purchases. Sales skyrocketed past expectations, setting a new record of 39.5 million background checks.

A surge in first-time buyers poured into gun stores, expressing fear over a rise in crime, the harsh lockdowns imposed across much of the country, and the push to defund police departments.

Some thought a slump in gun sales was likely in 2021, but thus far, background checks have come in at the second-highest numbers ever during most months, falling behind only the same months in 2020.

“People are still very concerned for their personal safety. They can see crime is up,” Mark Olivia, NSSF’s director of public affairs, told The Epoch Times, noting that recently released FBI data show murders increased by nearly 30 percent in 2020.

“They’re responding to that. They’re taking ownership of their Second Amendment rights and their constitutional right to be able to protect themselves and their family and bear arms to do that.”

The previous record year was 2016, when there were 15.7 million background checks conducted for gun sales.

NSSF crunches numbers from the FBI, which conducts instant background checks for gun sales and permits. It separates checks done for gun sales.

Representatives for the Brady Campaign and Moms Demand Action, both groups that push for legislation and action to cut down on gun sales, didn’t respond to requests for comment by press time.

Mike Weeks, the owner of Georgia Gun Store in Gainesville, Georgia, said he saw a 50 percent increase in sales in 2020. But he’s actually seeing more sales thus far in 2021.

“I’ve been thinking that it was slowing down, but every time I look at the numbers, it hasn’t,” he told The Epoch Times.

Many buyers in 2020 were first-time gun owners, Weeks said. In 2021, the store is seeing a mix of gun owners expanding their collection and first-time buyers.

Many stores in 2020 had trouble stocking shelves because of the increase in demand. Supply concerns are easing, due in part to the reduced demand.

“We are actually able to keep some guns on the shelves whereas last year, as soon as it hit the door it sold. So we’ve been able to rebuild our inventory,” Weeks said. “Accessories are doing fine as far as availability. Most calibers of ammunition are available now, although they are considerably more expensive than they used.”