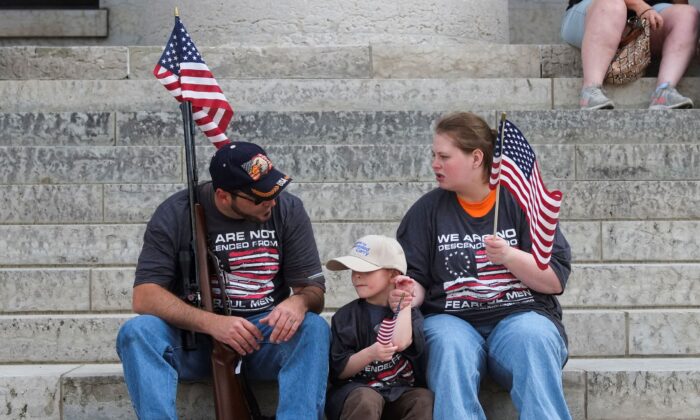 Gun owners and second amendment advocates gathered at the Ohio State House to protest against red flag laws proposed by Ohio Gov. Mike DeWine and national politicians in the wake of a wave of mass shootings throughout the U.S. in a file photo. (Matthew Hatcher/Getty Images)
Social Issues

With Oregon’s new gun law set to take effect in less than three weeks, the first legal challenge has been filed in federal court.

Passed with just 50.7 percent of the vote, Ballot Measure 114 requires Oregonians to undergo a background check and take a class, which does not yet exist, to obtain a permit to purchase a firearm. It also bans magazines that hold more than 10 rounds.

Plaintiffs seek to prevent the measure from taking effect on Dec. 8 while a judge decides if it meets constitutional muster.

Their complaint primarily takes issue with the magazine ban, arguing that it violates both their Second Amendment right to keep and bear arms and the Due Process Clause.

“Many of the nation’s best-selling handguns and rifles come standard with magazines that can hold more than 10 rounds—and firearms equipped with such magazines are safely possessed by law-abiding citizens in the vast majority of States,” attorney John Kaempf wrote in the complaint obtained by The Epoch Times.

Proponents of the measure argue that the ban on what they call “large-capacity magazines” would help reduce mass shootings as shooters would have to pause to reload before firing dozens of shots.

“To the contrary, the only thing the ban contained in [Amendment] 114 ensures is that a criminal unlawfully carrying a firearm with a magazine over 10 rounds will have a potentially devastating advantage over his law-abiding victim,” Kaempf wrote.

The complaint also argues that magazines that hold more than 10 rounds shouldn’t be considered “large capacity,” and are protected under the Second Amendment, as they’re “in common use” for self-defense.

“The reason for the popularity of these magazines is that in a confrontation with a violent attacker, having enough ammunition can be the difference between life and death,” it claims.

Court challenges to similar bans on large-capacity magazines are pending in California and Washington.

The complaint argues that the measure violates the Due Process clause.

Under the new rules, people who already own the magazines can keep them in a private home or on private property, use them at a shooting range or in a shooting competition, or for recreational purposes such as hunting as allowed by state law. But the owner must be able prove that they possessed the magazines before the ban and transporting them between the home and one of these approved activities could result in a Class A Misdemeanor.

“Legislation that changes the law retroactively—making conduct that was legal when undertaken illegal—is especially likely to run afoul of the Due Process Clause,” the complaint states. Measure 114 does just that by criminalizing the “continued possession of magazines that were lawful when acquired.”

The complaint cites the June 2022 U.S. Supreme Court ruling in New York v. Bruen, which struck down a New York law that placed strict limits on carrying guns outside the home.

Plaintiffs in the complaint include the Oregon Firearms Federation, Sherman County Sheriff Brad Lohrey—one of a growing list of county sheriffs who have said they won’t prioritize or enforce the new magazine ban—and Adam Johnson, who owns Coat of Arms Custom Firearms in Keizer.

AG Rosenblum previously stated through a spokesperson that her office will defend the measure against anticipated lawsuits and help agencies to implement the new law.

Lawyers advising the Oregon Hunters Association and other gun rights advocates will likely file similar complaints in the coming week, Leonard Williamson, who has been a licensed firearms dealer for 20 years and helps advise gun rights groups in Oregon, told The Epoch Times.

“We’re still adding plaintiffs to the suit, and we’ll be ready,” wrote Alan M. Gottlieb, the founder of the Bellevue, a Washington-based Second Amendment Foundation.