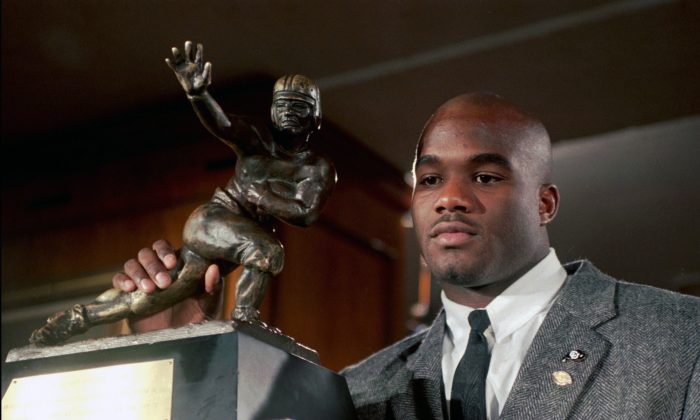 Colorado's Rashaan Salaam poses with his 1994 Heisman Trophy at the Downtown Athletic Club in New York in this Dec. 10, 1994, file photo. Authorities say Rashaan Salaam has been found dead in a park in Boulder, Colo. The Boulder County coroner’s office said on Dec. 6, 2016, that it is still investigating the death of 42-year-old Salaam. (AP Photo/Adam Nadel, File)
US

Gun and Note Found Near Rashaan Salaam’s Body; Mother Believes Suicide Was Cause of Death

A gun and note were discovered near the body of Rashaan Salaam, a former Heisman-winning running back who played briefly in the NFL.

Salaam was found dead in Boulder, Colorado, inside a park on Monday evening. The Boulder County Coroner’s office confirmed his death, saying it took place at Eben G. Fine Park—just a short while away from University of Colorado’s Folsom Field, where his college football career began, CBS News reported.

The cause of death and the contents of the note were not disclosed.

“He wouldn’t return text messages, calls… I think, obviously he was going through some stuff,” Salaam’s friend Joe Devereaux told CBS. “I wish he would have reached out to anybody, you know, because this is just awful.”

Salaam had a stellar college career, winning the Heisman Trophy in his 1994 junior season when he rushed for 2,055 yards and 24 touchdowns.

He was selected in the first round of the NFL draft by the Chicago Bears in 1995 and posted decent numbers: He rushed for 1,074 yards and 10 touchdowns as a rookie. But his career faltered after he suffered a series of injuries. He left the NFL a few years later.

“He was so defined, I think too often by winning the Heisman Trophy and not by other things that made him a whole person, things that he loved and cared about and I think he, in fact I know he had challenges at times making that transition,” former Colorado player Charles Johnson told CBS.

His mother, Khalada, told USA Today police suspect he killed himself. “They said they found a note and would share that with us when we get there,” she said.

“It’s just a big trip. That’s all I can say,” his mother said. “We just found out this morning, and we’re going to Colorado to take care of him.”