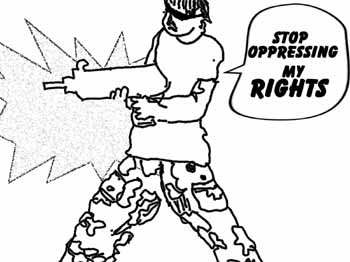 Martha Rosenberg
biggersmaller
Print
“The NRA is asking gunmen to refrain from mass shootings while key gun bills are before legislators,” says a newscaster in a recent editorial cartoon.

Then, April began with the killing of 14 in Binghamton, NY and fatal shootings of three Pittsburgh policemen.

No one is even counting a church shooting in Turlock, CA, the fatal shooting of five in Miami and the Mexico drug shootings that used US weapons, also in March.

The March and April bloodbaths create PR problems for the gun lobby. When gunmen like Oakland’s Lovelle Mixon or Pittsburgh’s Richard Poplawski kill police with assault weapons, it eviscerates the gun lobby’s Good-Guys-Need-To-Be-Armed-Against-Bad-Guys argument since police are obviously armed and good guys. (Moreover, they are Enforcing-Existing-Laws, another gun lobby mantra.)

Mad at the Obama administration, the press, the United Nations and a complacent public, LaPierre couldn’t decide whether Secretary of State Hillary Clinton was friend or foe—first quoting her to prove President Obama is a gun grabber, then showing clips in which she was the gun grabber recommending trigger locks and licenses.

Ordaining that Mexico needs more guns not less and that law makers shouldn’t legislate “on the fresh graves of tragedy,” you’d never know the NRA realized its wet dream last year when the Supreme Court affirmed the Second Amendment in District of Columbia vs. Heller.

Of course, for years the NRA’s Just Folks position against effete elites has conflicted with its actual deep-pocketed influence peddling with political campaigns and causes and turned off followers. For years its hunter/rancher and rural constituents have recoiled at its paranoid secessionist/military weapon wing which drives so much NRA policy.

But now, expansionist laws that legalize guns in churches, on campuses and on state parks are starting to be regarded as causing not preventing violence. After all, campus killers like Northern Illinois University’s Stephen Phillip Kazmierczak and Virginia Tech’s Seung-Hui Cho were legal gun owners.

So were Wisconsin church-killer Terry Ratzmann and immigrants Sulejman Talovic, the Trolley Square mall killer, Chai Vang, the Wisconsin “hunter killer” and Bart A. Ross, who killed a Chicago federal judge’s family—all of whom had no trouble buying guns.

Not only were Jiverly Voong, the Binghamton killer and Richard Poplawski, the Pittsburgh killer, legal gun owners who bought repeated weapons at local gun stores—Poplawski was licensed to carry a concealed weapon. Let’s enforce existing laws, as the NRA says!

What’s also changing is newspapers like the Memphis Commercial Appeal are publishing searchable bases of state permit holders, despite gun owner identity “seal” laws in some states like Florida, Ohio and South Dakota, so people can see if their daycare worker or dentist is armed.

Which is more embarrassing for the gun lobby—the image that it’s afraid of you and or the image of it begging the government to protect it from you and me? What happened to no government interference? And why are they so scared, anyway? They’re the ones that are armed.

It makes you think of Larry Singleton who attacked and mutilated 15-year-old hitchhiker Mary Vincent near Sacramento in 1978 because he was “afraid of her.”

Martha Rosenberg is a writer in Chicago.